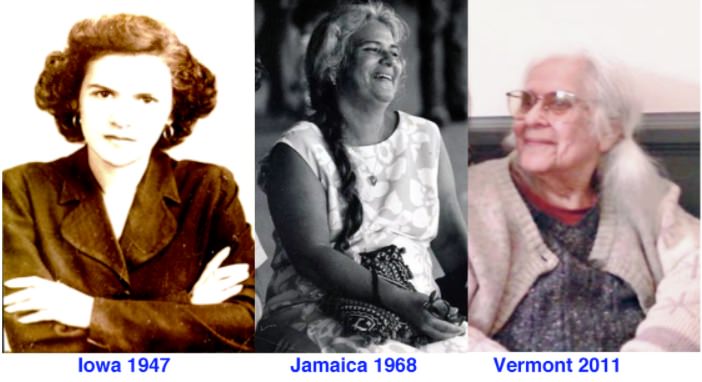 Nora was top student at the University of Panama Law School when an unexpected scholarship offer came to study biology in the United States. She attended Coe College in Cedar Rapids, Iowa, Iowa State University, De Paul University, and did doctoral research in neurophysiology at the University of Chicago, publishing her first paper in 1949 on Inhibition of Brain Dehydrogenases by Acetylcholinesterases. There she met and married Thomas F. Goreau, a visiting researcher who was simultaneously doing a PhD in Ecology at Yale University and a MD at University of Pennsylvania.

Soon after they moved to Jamaica, where Tom taught Physiology at the new
University of the West Indies Medical School, training a generation of doctors for a
region with very few. He was the first diving marine scientist in the world, the first
to study the zonation of the reef, doing fundamental cutting edge work in every
aspect of coral reef biochemistry, physiology, ecology, and geology. While Nora
was not herself a diver, she was an equal partner in the research, specializing in
the anatomy, physiology, biochemistry, and histology of coral reef organisms Tom
found. Working in the field on weekends under primitive conditions without
funding while they taught in Kingston during the week, Nora identified the
specimens Tom collected in the microscope and set up experiments to understand
their biological roles in the reef.

To support their scientific research she also worked as a biology teacher in two
Jamaican girls’ high schools, Wolmer’s and Immaculate. Her ability to inspire
students was such that all her students achieved highest First Class Distinctions
in the British university entrance exams, except for one who got a Second Class
Distinction. This was despite the fact that she took on classes with no biology
background less than a year before the examination, and the schools had no copies
of the examination syllabus or curriculum, so she had to cover all aspects of
biology. Her students went on to become Jamaica’s first women scientists.

Jamaica was surrounded by pristine coral reefs, which were the first in the world
to be explored by diving, and they moved systematically all around the island to
study every reef. Tom and Nora founded their first marine laboratory in abandoned
naval warehouses in the old pirate capital, Port Royal, badly damaged by Hurricane
Charlie in 1951, which caused massive destruction to the coral reefs, and carried
away the roof of their home. They founded the Discovery Bay Marine Lab to expand
their research to the North Coast, which had some of the most magnificent reefs in
the Caribbean, with vertical canyons a hundred feet deep covered with corals (now
graveyards). Discovery Bay was named for Columbus’ arrival in Jamaica, but the
Admiral disappointedly called it Puerto Seco, or Dry Harbour, because they nearly
died running over the coral reef into the protected bay, only to find none of the
fresh water they were desperate for.

Tom and Nora built a laboratory in the abandoned toilet of the Puerto Seco
Fisherman’s Beach, useless to the fishermen because there was no water. They
arranged with a nearby resort to get water piped in for a lab they built, and for the
fishermen to rinse their catch and gear, building the toilet up with research space
and lockers for the fishermens’ gear. There they did the fundamental research that
made the Lab the world’s leader in tropical marine biology working next to the
fishermen, who were grateful for the knowledge they gained.

Their path-breaking scientific work resulted in Sir Maurice Yonge, leader of the
1920s Cambridge University Great Barrier Reef Expedition, and founder of modern
coral reef research, adopting them as his intellectual successors. Maurice had
been the world’s top expert on coral reefs although he had stopped working in
reefs in the 1920s, but he was re-invigorated by the way Tom and Nora constantly
pushed the science ahead with new methods. Maurice joined them out of
retirement to do fundamental research on coral nutrition, giant clams, on bizarre
symbiotic clams living inside coral skeletons, and returning to the Great Barrier
Reef with Tom in the 1960s to look at the changes there 40 years later.

Sir Maurice Yonge and Princess Alice, Countess of Athlone, the great aunt of
Queen Elizabeth II, kindly helped them get support from the Wolfson foundation in
England to build a modern research laboratory on the other side of Discovery Bay,
on land they got donated to the University of the West Indies by a bauxite company.
They designed the lab to be the best research facility for tropical science in the
world. Tragically, just before the lab opened, Tom suddenly died at 45 from severe
cancer, induced by exposure to nuclear radiation in 1947, when he had been the
diver who collected radioactive specimens from Bikini Atoll after the first nuclear
bomb test. Nora was left with three children to support.

The pace of their constant field work exploring the unknown world of coral reefs
left little time for writing, so Nora proceeded to publish their key findings in a series
of classic scientific papers on the ecology, geology, and biology of coral reef
ecosystems, describing how reef organisms interact and how they function at the
fundamental level of the carbon biogeochemical cycle. As the person who knew
more about corals than anyone, she single-handedly preserved and passed on the
knowledge of the past, and throughout the 1970s and 1980s trained new
generations of coral reef researchers who came from all over the world to
Discovery Bay to learn from her deep knowledge of coral reefs and seek her
research advice and constructive criticism.

A partial list of her many pioneering scientific accomplishments include:
Nora, the first Panamanian and Central American marine scientist, was the world’s
top expert on coral anatomy, histology, physiology, cell biology, developmental
biology, and biochemistry, an equal partner with her husband, who specialized in
diving, ecology, and geology of reefs. She and Tom pioneered understanding of
the complex symbiosis between corals and algae by developing analytical and
experimental methods to use radioactive isotopes to trace the complex pathways
and interactions of carbon through photosynthesis, feeding, excretion, and skeleton growth, gaining fundamental insight into coral physiology and reef
ecology that could have been gained no other way.

Nora was the first to discover the sclerosponges, from specimens Tom brought
back from caves in the reef 300 feet down. These living fossils had built reefs
hundreds of millions of years ago and were thought long extinct. After Tom’s death
her name was unconscionably omitted from the scientific papers describing her
discoveries, written by his US colleague.

She saved and maintained the definitive scientific collections of Caribbean coral
skeletons, microscope tissue slides and preserved specimens, papers, field notes,
and the world’s largest collection of underwater coral reef photographs from the
1940s, 1950s, and 1960s. These are in the hands of the non-profit Global Coral Reef
Alliance, which is seeking funds to preserve her legacy by scanning the entire
collection and making it available on the web as the definitive record of a now-
vanished world of pristine coral reefs.

Nora inspired everyone who knew her with her warmth, compassion, dignity,
humility, love of knowledge, insistence on rigor and excellence, and quiet
persistence despite hopeless adversity. For single-handedly preserving the entire
field of coral research, documenting it, and training new generations to build on
past knowledge, she is regarded as the Mother of Coral Reef Science.

She is deeply missed by sons Tom, Peter, and Stefan, daughters-in–law Margaret,
Clare, and Cheri, and grandchildren Maya, Marina, David, Lodi, Tara, Erik, and
Emma. Her ashes will be buried in the family tomb in Panama.