Biorock Corals grow faster, longer and wider, depending on species and depth

A recent paper from Banda Aceh, Indonesia confirms yet again that Biorock accelerates the growth of corals around 4 times faster than controls:

Abstract. This study was carried out in sea ecotourism park (Taman Wisata Alam Laut-TWAL), Rubiah Island, Sabang, from July to September 2017. The aim of this study was to evaluate the coral transplantation using biorock technique. Biorock is capable of producing minerals by applying a low voltage direct electrical current, which is commonly recognized as mineral accretion. The study used following materials, i.e. iron stick, titanium mesh, power supply, wire, cable ties, water quality tester, underwater stationery, diving equipment and coral fragments. Field experiment of biorock was applied in two depth levels: 3 m and 8 m. A total of 3 biorock structures and 1 control (non-biorock) were applied in each depth level. Each of the transplantations contained 10 fragments of Acropora and Pocillopora. Parameters observed included absolute growth, coral growth rate, survival rate, and water quality, and all those parameters were observed monthly. The results exhibited that absolute growth ratio of Acropora and Pocillopora was 4:1 (biorock:control), while the growth rate of both corals under biorock treatment was higher than that of corals under control treatment. For both genera, the survival rate reached more than 75%, while it reached only 70% under control treatment at 8 m depth level. No adverse changes in water quality were observed in the experimental location.

Detailed analysis of the data in this paper reveals several important patterns. 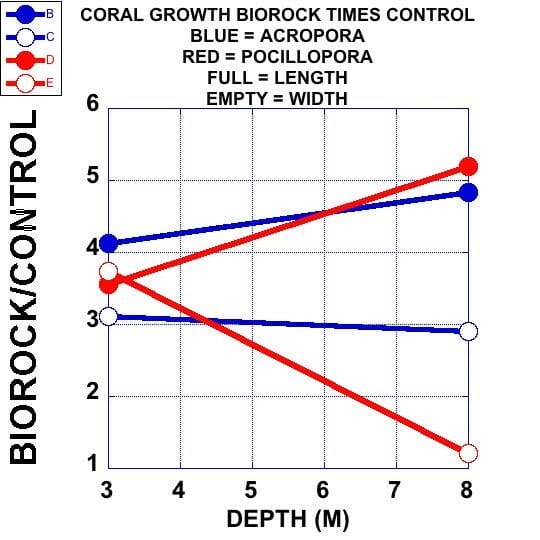 Figure 1. The ratio of the stimulation of growth in height and width of Acropora microphthalma and Pocillopora verrucosa corals with Biorock over control corals with no Biorock stimulation, at water depths of 3 and 8 meters. Graph by T. Goreau replotted from data in Munandar et al., 2018

The data shows that electricity increased both the length and width of branches of both species at both depths (all ratios are greater than 1, and range up to 5.2 times faster. The values found fall in the typical range of 3-5 times coral growth enhancement previously reported from many Biorock locations (Goreau, 2014).

What is most interesting in the data is the different patterns of stimulation seen between species and depths.

Both Acropora and Pocillopora branch length growth is accelerated even faster with electricity in deeper water than in shallow water, but while Acropora is more stimulated than Pocillopora at 3 meters, Pocillopora is stimulated even more than Acropora at 8 meters.

Both Acropora and Pocillopora branch width growth is accelerated by electricity, but in complete contrast to the length of the branches, the width growth increase is lower in deeper water, and while the decrease is small for Acropora it is very large for Pocillopora. For more details and statistical treatment please see Munandar et al. (2018)

The result is that in deeper water the Biorock electrical process causes corals to grow longer faster than they grow wider, so while branches are both longer and wider, their length to width aspect ratio decreases, making them relatively longer and narrower in deeper water than in shallow water, especially Pocillopora.

Biorock has been observed to benefit all species of corals tested, including around 80% of all the reef building coral genera and around half the species. Regardless whether intrinsic coral form is branching, round, platy, or encrusting, Biorock grown corals show denser polyp spacing, more intense budding and branching, and brighter colors, as well as faster growth and higher survival, resulting in more perfect morphology, but the degree of stimulation depends on the species, operating conditions, and water quality. Biorock has been observed to work best in cleanest waters, but to also work in very poor-quality waters where no other method works (Goreau, 2014).

This new paper suggests that there may be significant morphological differences between coral species with depth under electrical stimulation. These data suggest that Biorock stimulation compensates for reduced light in deeper waters. Enhanced growth in deeper waters using Biorock technology will prove to be very important, because shallowest corals are most vulnerable to mortality from high temperature compounded by high light stress, and deeper waters provide a partial refuge from the worst impacts of high temperature and light stress.

Most corals on Biorock reefs survive the most severe bleaching events, which kill 95-99% of corals on nearby reefs without Biorock electrical protection (Goreau, 2014). In addition, Biorock greatly increases larvae settlement, growth, and biodiversity of corals and of all reef species after catastrophic bleaching events, making it an unequalled tool both to protect corals from bleaching and to rapidly restore devastated coral reef ecosystems.