The Covid-19 virus is now helping clean up coastal water quality in Jamaica through a chain of unexpected indirect environmental impacts.

“As of 2 May 2020, over 40 cruise ships have had confirmed positive cases of coronavirus on board. In addition, over 100,000 crew members remain on cruise ships, with many unable to be repatriated because cruise lines refuse to cover the cost of doing so.”

There are more coronavirus cases among crew and staff than passengers. Most come from Indonesia, the Philippines, and other island nations, and are paid around $50 per month. They are being locked up in cruise ship ports from where they may be deported to their own countries without adequate precautions to prevent disease spread.

Governments around the world are advising people not to go on cruises because of the very high infection rate and death rates of vulnerable senior citizens, and cruise ship lines are shutting down. Because cruise ships are proven incubators for infectious disease, there is little chance of mass cruises returning.

Already signs of environmental improvement are clear in areas where cruise ships dominated local tourism, and this is especially obvious in Discovery Bay, Jamaica. Shut down of the cruise ship industry caused a captive dolphin operation to close. They removed the dolphins from the water on March 21, 2020.

Just a few days before the dolphins were put in the cages Dr. Tom Goreau filmed the dolphin cages and the surrounding seagrass beds on March 8, 2019, and found them completely free of weedy algae that indicate high nutrient levels. Based on his extensive studies at captive dolphin facilities in Mexico he warned that if the dolphins moved in, water quality would deteriorate, becoming turbid with dolphin feces and bacteria, and cause excessive algae growth on seagrass, reefs, and beaches. In the year that followed these predictions were all proven true.

Local residents reported an immediate improvement in water quality after dolphin removal. Stinking slime that emanated from the dolphin pens and covered the beach nearby has disappeared. Water that was murky with suspended dolphin feces and bacteria has become clear again. Masses of slimy weedy algae that were smothering dolphin pens, seagrasses, coral reefs, and bathing areas are gone.

Beaches that could not be used because slimy algae covered the sand and caused skin rashes now has clear water again. Now the reefs can start recovering!

The captive dolphin industry is widely viewed by animal rights activists as exploiting intelligent wild animals who should not be imprisoned. GCRA’s work on their impact on algae in Mexico showed that they are a threat to the health of surrounding seagrass and coral reefs.

If the cruise ship industry collapses, so will the captive dolphin industry. The question now is if they will remove dolphins that are fouling the waters and killing reefs, or keep dumping rotting food and dolphin feces in the water in the hope that the cruise ship industry bounces back to business as usual soon. It would be best if the dolphins were liberated: they do no environmental harm to corals when they swim 50 kilometers a day, any pollution problems they create are purely because they are imprisoned in concentration camps by people making money from them!

Even more interesting is that after the captive dolphins were removed, the wild dolphins have been coming back to swim around the now empty pens. This indicates a strong sense of memory and of responsibility and is yet another sign of their extraordinary intelligence and social organization.

Discovery Bay immediately showed how pollution from just a handful of dolphins severely affected a large area down-current from it, and how the effects disappeared as soon as dolphins were removed. The same impacts are being felt in all other areas where captive dolphins are being held, most of them much larger than in Discovery Bay, for example in the Mexican Caribbean. It is time that captive dolphin operations be shut down completely as a threat to the health of marine ecosystems, humans, and dolphins.

For more information on how captive dolphins cause water pollution that kills coral reefs please see:

The tourist beach at Puerto Seco with the dolphin cages at center-right before dolphins fouled the waters and made the beaches on the right unusable because of algae and foul smells. 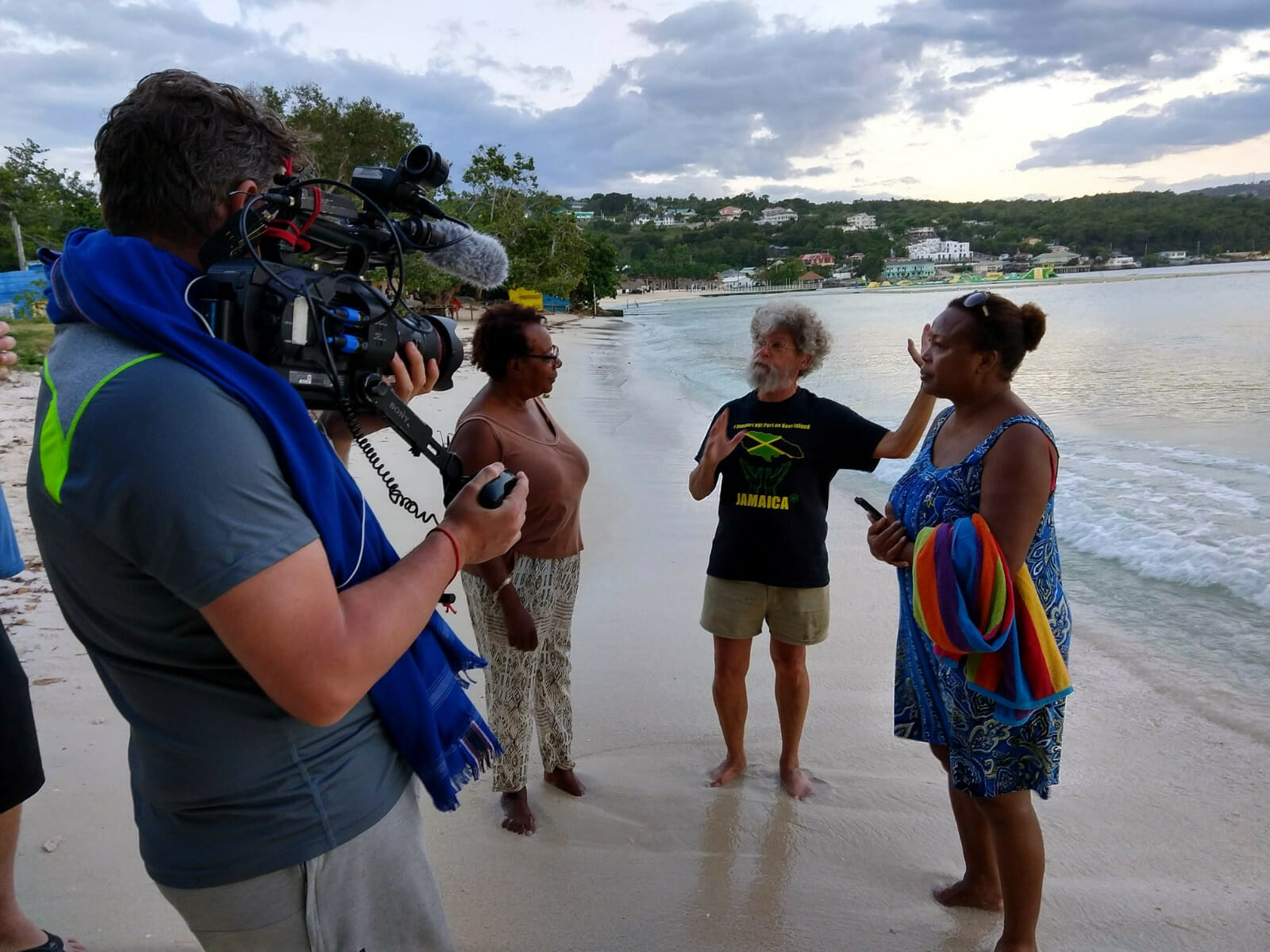 Tom Goreau discusses dolphin pollution impacts at the Old Discovery Bay Marine Laboratory with local environmental leaders from the Discovery Bay Development Association a few days before the dolphins began to foul the waters and make the beach unusable. Dolphin pens are seen in the background.