The Town of Lauderdale-By-The-Sea has a unique artificial reef project just off the Windjammer Resort south of Anglin’s Pier. The Biorock reef utilizes a low-level electric current from two solar-powered buoys to help corals grow much faster than they would in a natural environment while also help creating vital new underwater habitat for tropical fish, corals and other species.

The speakers are Dr. Thomas J Goreau and Stephen Attis. They will discuss how the project’s Biorock technology makes it the only artificial reef of its type in the U.S. and what was involved in building and installing the reef structure in September 2011. This is a unique reef project.

Dr. Thomas Goreau is president of the Global Coral Reef Alliance, a non-profit organization for coral reef protection in Cambridge, Mass. He is also Coordinator of the United Nations Commission on Sustainable Development Partnership in New Technologies for Small Island Developing States. Goreau works with tropical fishing communities and organizations around the world to restore their coral reefs and fisheries, especially the Kuna Indians of Panama, the only native people of the Americas to preserve their cultural and political independence.

Stephen Attis is the president and founder of Vone? Research Inc., a non-profit organization comprised of highly skilled volunteer scuba divers dedicated to protecting Florida’s ocean  resources. Vone Research partnered with the Global Coral Reef Alliance to assist with the installation and monitoring of the Biorock reef off Lauderdale-By-The-Sea. Vone? Research has been involved in reef restoration for more than a decade. A veteran diver, Stephen also helped to install the Town’s Shipwreck Snorkel Trail in 2002 with the Marine Archeological Council.

PHOTOGRAPHS BELOW BY MARC FURTH: 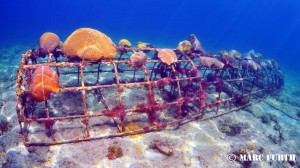 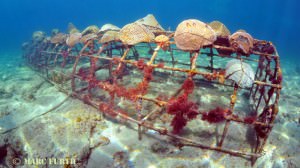