Measurements made in flow through tanks using bottom water from the Hudson river off midtown Manhattan over two years found that oysters with Biorock® treatment had 2.75 and 1.62 times faster growth rate than controls in 2007 and 2008 respectively, while the control oysters had 2.08 and 1.36 times higher mortality than Biorock® treatments. This data therefore strongly suggests that Biorock® oysters grow faster and have lower mortality, indicating that this method should be highly applicable to restoration of oyster reefs. 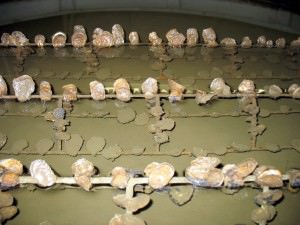 Oysters growing on Biorock® frames in flow through tank