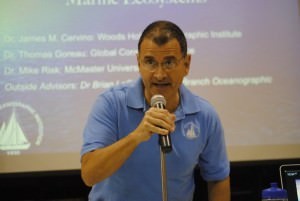 The CAC gathering was originally scheduled so that New York City-based marine scientist Dr. James M. Cervino could share his own study’s conclusions: that nitrogen and phosphorous from a luxury golf course resort built in the Bahamas a decade earlier by Discovery Land Company, the same firm looking to build a similar development in East Quogue, has damaged a nearby reef. Saturday’s meeting took a turn toward the tense when supporters of the local project showed up to defend the developer.

As part of his hour-long presentation, Dr. Cervino shared a photograph of the coral reef that he said was taken near Discovery Land’s Baker’s Bay Golf and Ocean Club in the Bahamas—a complex that features 125 homes, 240 estate lots, and an 18-hole golf course on 585 acres located on the island of Great Guana Cay—before ground was broken on the project. The reef in the photo was brightly colored and did not show any evident signs of damage.

Then Dr. Cervino showed a second picture of the same reef that he said was taken after the development and golf course were built; the reef in the photograph was covered in what appeared to be a layer of fuzz.

“You don’t need to be a scientist to determine what is happening here,” Dr. Cervino said while working the slide machine, adding that the fuzz in the second photo means that the reef is diseased.

“I knew it was going to happen,” he said, referring to damage to the coral reef, while explaining his interest in the Discovery Land project. “So I said, ‘Let me get to the crime scene before the crime.’”

Mark Hissey, vice president for Arizona-based Discovery Land, which is now seeking a special change of zone from the Southampton Town Board in order to build a similar 118-home luxury resort featuring an 18-hole golf course on nearly 600 acres in East Quogue, attended Saturday’s meeting, held inside the hamlet’s elementary school. He maintained that Dr. Cervino’s presentation was skewed, adding that his company’s development—particularly, the golf course—is not responsible for the damage to the nearby coral reef.

“Frankly, it was filled with inaccuracies and distortions,” Mr. Hissey said of Dr. Cervino’s presentation.

Dr. Goreau and Dr. Lapointe did not attend Saturday’s meeting. But Dr. Goreau wrote a letter that was read aloud during Saturday’s meeting, which attracted about 100 people, in which he pointed out that he was wrongly listed as a key contact on Discovery Land’s environmental impact statement for the Baker’s Bay golf course—a mistake later acknowledged by Mr. Hissey.

“My name was used without my permission or knowledge, which I totally reject,” Dr. Goreau wrote in his statement. “I have studied the Discovery Land Company on-site for 10 years, and I would like to comment on my reports.”

He went on to explain how the coral reef in Guana Cay was tested before Baker’s Bay was built, and that the testing continued in the years after construction began. Like Dr. Cervino, Dr. Goreau said the health of the coral reef severely declined after the golf course was built.

Ron Kass of East Quogue, who opposes Discovery Land’s plan for his hometown, also shared an email at Saturday’s meeting that he said was written by Dr. Kathleen Sealey, a professor from the University of Miami who served on Discovery Land’s Environmental Assessment and Environmental Management Team from 2004 until 2007, when her contract ended, according to Mr. Hissey.

In her email, which was read by Marissa Bridge of East Quogue, Dr. Sealey said that Discovery Land did not follow her plans or recommendations.

“As a Bahamian citizen (with dual U.S. citizenship), I am even more embarrassed that the government of the Bahamas did not enforce the Heads of Agreement and the original environmental management plan,” Dr. Sealey wrote. “In my opinion, [Discovery Land Company] did not act in good faith on their agreements, and actively tried to subvert the monitoring protocols and government site visits.

“I am deeply saddened that [Baker’s Bay] turned out to be so destructive to the island of Guana Cay,” she continued. “This is not the way the project started in 2004.”

After emailing Mr. Kass, Dr. Sealey received a letter from Robert K. Adams, partner at Graham Thompson, a law office in the Bahamas that is representing Discovery Land in its Baker’s Bay project. In the letter. Mr. Adams states that Dr. Sealey’s email to Mr. Kass made “serious defamatory allegations against Discovery in connection with” the Baker’s Bay development.

The letter demanded that Dr. Sealey, and the University of Miami, stop publishing or republishing letters about the developer without Discovery Land’s prior review and approval. Mr. Adams also demanded a public apology from Dr. Sealey and also wants her to pay the developer damages and legal fees.

East Quogue Civic Association President Al Algieri, who organized Saturday’s meeting, then stood up and announced that Dr. Sealey could not offer additional information due to the letter from Mr. Adams, a copy of which was provided to The Press. “The truth is out—but you can’t hear it,” Mr. Algieri said.

This week, Mr. Hissey said that Dr. Sealey had, in fact, complied with the developer’s demands and both retracted her comments and issued a public apology to Discovery Land.

During Saturday’s meeting, Mr. Kass and several other attendees asked Dr. Livingston Marshall, senior vice president of environmental community affairs at Baker’s Bay, who showed up with other project supporters, why his company is threatening a scientist who is critical of their project.

Dr. Marshall said that Dr. Sealey was never threatened, but he said he could understand “her being terrified, because it was a very, very serious matter, which I explained to her. That it was a serious matter.”

On Tuesday, Mr. Hissey said he was disappointed to hear an allegation that Dr. Sealey was threatened. “I think Ron Kass’s accusation toward Dr. Marshall—I think it was completely out of order,” he said. “Dr. Marshall never threatened Dr. Sealey. And for him to make comments like that in public is absolutely shameful.”

Saturday’s meeting briefly turned into a shouting match when supporters of Discovery Land’s East Quogue project, dubbed “The Hills at Southampton,” entered the elementary school, some wearing shirts featuring the words “The Hills.” At that point, several attendees, including Mr. Kass, started asking the Discovery Land representatives questions about the company’s resort in the Bahamas—namely, if the golf course at Baker’s Bay played a role in damaging the coral reef.

His response prompted several minutes of shouting as attendees fought to be heard over each other. The exchanges spurred Mr. Algieri to grab the microphone and announce that officials representing Discovery Land were not welcome at his meeting.

“It’s obvious that Discovery Land, that had a breakfast this morning, has sent over a number of people, not to ask questions but to make statements that may not be true,” Mr. Algieri said. “Everyone can speak, but if you came to make a statement because you work or have some association with Discovery Land, you are in the wrong place.”

At 9 a.m.—about an hour before the CAC meeting began—Discovery Land served breakfast and held an informational meeting about its East Quogue project at the New Moon Cafe on Main Street, about a half mile away from the elementary school. Discovery Land’s meeting was originally scheduled for 10 a.m.—the exact same time as the civic’s meeting—but several days before the event the developer ended up pushing up the start time of its meeting by an hour.

In addition to blaming the golf course for damaging the reef, Dr. Cervino said he believes that harmful red and brown algae now appearing in the water near the Baker’s Bay golf course can be traced back to the nitrogen coming from the golf course that is located “a football’s throw away” from the pollution he has observed.

“It’s a no-brainer,” Dr. Cervino said. “No scientist can debate this. Add nitrogen into the water and this is what you get.”