Posted on the Earth Island Journal
BY ZOE LOFTUS-FARREN – NOVEMBER 15, 2013

Technology could be used to restore oyster and coral reef habitats around the world, researchers say

Most of us learn at an early age that electricity and water don’t mix. It is just this combination, however, that has been used for decades to encourage growth of reef habitat around the world. New research from Texas A&M University – Corpus Cristi has built upon existing technology to determine the perfect combination of electrical current, polarity, and voltage to maximize oyster reef growth. 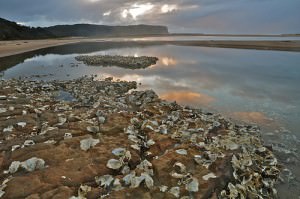 The use of electrical currents can also help reefs survive under stressful climate conditions. Photo by: Durras North

“We knew carbonate accumulation could be stimulated using electrical currents,” explains Dr. Paul Zimba, director of the Center for Coastal Studies at the university. “But there wasn’t enough research done on specific polarity, voltage and electrical current types needed to maximize growth.”

There are two primary components to the technology used by Zimba and graduate student Eliane Oelho. The first is a metal frame, which becomes the base for reef growth. The second component is a low voltage electrical charge, which causes calcium carbonate to precipitate and stick to the metal frame. The calcium carbonate structure provides an ideal environment for reef growth.

The researchers put one foot by four foot sections of rebar in the water and charged them using solar panels. The results were impressive. “In three weeks, we were able to get a one foot by four foot intact reef,” Zimba says. “There were oysters at very high density… and they were growing very rapidly.”

This research could not have come soon enough. “Many of the coastal regions of south Texas, and for that matter many areas of the Gulf of Mexico, [have] declining oyster populations,” Zimba says. “In Texas, a major reason for that was the harvesting of oyster shell for use in road construction that occurred in the 1950s to 1980s. That decimated the population of oysters, and it changed the [Gulf oyster] community from a hard bottom community to one that is a softer mud community.”

Oysters are no longer harvested for road-building purposes, but they face ongoing threats. “Oysters have evolved over millennia to live in brackish type water,” says Mark Dumesnil, upper Golf Coast program manager at The Nature Conservancy in Texas, and “lack of fresh water inflow is an issue.” Unsustainable harvesting and increasing pollution also threaten oyster populations.

Oyster reefs hold both economic and environmental value. “We know that oyster reefs provide a tremendous number of ecosystem services,” Dumesnil says. “Oysters filter a tremendous amount of water. [They] will sequester nitrogen, they will sequester carbon, [and] they will pull a lot of inorganic and organic material out of the water column.” Oyster reefs also attract other marine species and enhance local fishing opportunities.

Zimba and Oelho based their research on a technology called Biorock®, invented invented by Prof. Wolf Hilbertz and further developed by Dr. Thomas Goreau, president of the Global Coral Reef Alliance. Goreau has been using electrical charges to stimulate reef growth for more than three decades, and hopes the new research from Texas A&M-Corpus Christi will draw attention to the process.

The Global Coral Reef Alliance has also used the technology to restore coral reef habitat around the world. One of their restoration projects in Indonesia was recently awarded the United Nations Equator Award for Community-Based Development as well as the Special UN Development Program Award for Marine and Coastal Management.

The use of electrical currents can also help reefs survive under difficult conditions, which makes the technology particularly relevant in the face of global climate change.

“The biological benefits – which is to say, increased health, increased growth, increased energy, and increased resistance to environmental stress – that is a function of the electrical field,” Goreau says. “Because we increase the [corals’] ability to resist stress, we get up to 50 times higher survival rates for corals after extreme high temperature episodes. That is 5,000 percent higher survival. The result is that we are able to keep ecosystems alive where they would die, and grow new ones where there is no natural restoration.”

Zoe Loftus-Farren
Zoe Loftus-Farren is is a contributing editor at Earth Island Journal. She holds a J.D. from the University of California, Berkeley, School of Law, and and writes about climate change, environmental justice, and food policy. Follow her on Twitter @ZoeLoftusFarren