Global sea level rise and low lying coasts: Don’t be fooled by the calm before the storm that is about to hit us

To all concerned about global sea level rise issues

An extremely important new scientific paper just published explains why 2011 had anomalously low rate of global sea level rise, and why we are due to face much more rapid increases in the very near future, and has very profound implications for all low lying islands and coasts as well as for global climate change adaptation and mitigation policies.

Carmen Boening, Josh K. Willis, Felix W. Landerer, R. Steven Nerem, and John Fasullo, 2012, The 2011 La Niña: So strong, the oceans fell, Geophysical Research Letters 39, L19602, doi:10.1029/2012GL053055 brilliantly explains the exceptional events of 2011, reveals why this is the exception that proves the rule, and shows why we will experience very much faster sea level rise this year and next.

Global sea level rise is now accurately mapped worldwide by satellites, and shows a steady average increase of 3.2 millimeters per year (blue line in graph below). But the global rate fluctuates around the trend (red line) and of course there are strong local variations due to local changes in atmospheric pressure and wind and wave set-up. Please note that in 2011 the rate of global average sea level rise (red line) fell below the long-term average trend (blue line) to the greatest extent yet seen in the satellite record. 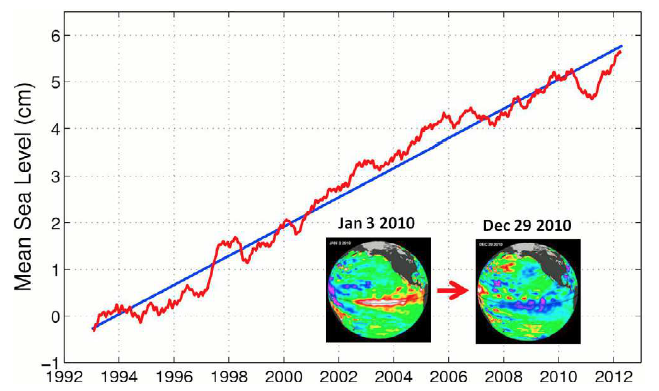 Global mean sea level from altimetry from 1992 to 2012 with annual and semi-annual variations removed and smoothed with a 60-day running mean filter [Nerem et al., 2010]. The slope of the trend (blue line) is 3.2 mm/year after a GIA correction has been applied (0.3 mm/year).
The insets show maps of SSH anomaly relative to the background trend and seasonal climatology, for 10-day averages centered on Jan 3 2010 (near the peak of the El Niño) and Dec 29 2010 (the peak of La Niña).

Why did this happen? The reason is very clearly shown by Boening et al.’s map of increased fresh water storage on land in 2011, where blue indicates larger amounts of fresh water and red means less: 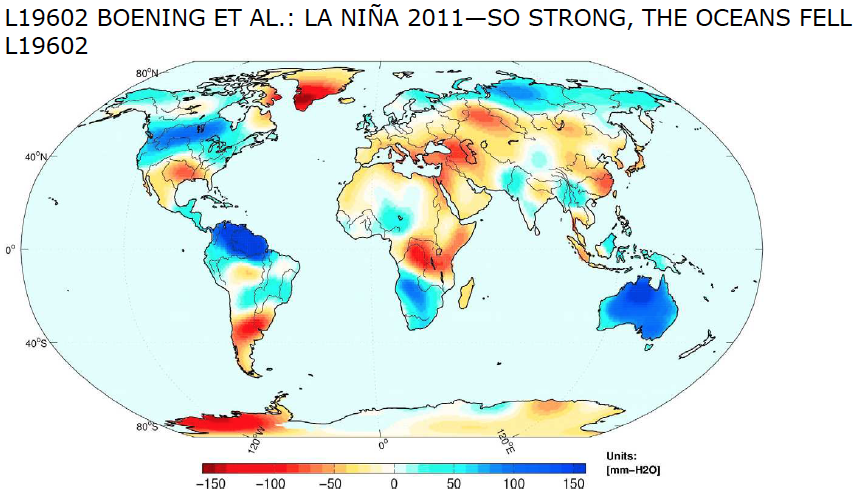 During the strong La Niña of 2010-2011 there was record rainfall worldwide. While a lot of press went towards the catastrophic flooding in Pakistan, of far greater global significance was the all time record rainfall and flooding in northern South America and in northern Australia, which were ignored by the press. I saw first hand the flooding devastation in Panama and Colombia, the worst in 500 years of written records. All of this water that had evaporated from the ocean and rained on land actually reduced global sea levels slightly. This is purely temporary, the flood waters have now evaporated or drained back into the sea, explaining the much faster rise of sea level after this exceptional blip (see top right end of the first figure). 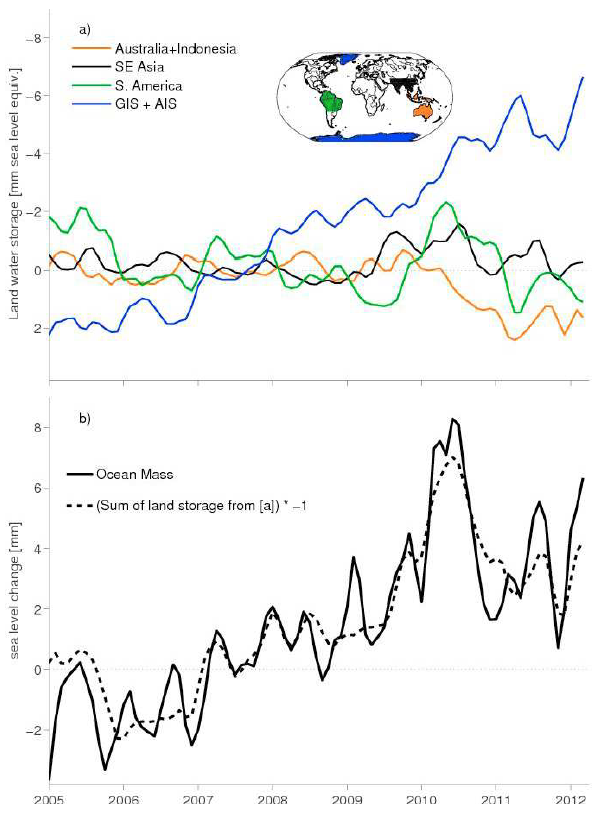 The same happened during and after the second biggest slowdown in global sea level rise, which took place during the strong La Niña of 1997 (see lower left of first figure). During that event I dived across the tropical Pacific from Tuvalu, Marshall Islands, Federated States of Micronesia, Palau, and Saipan (they would not let me dive in Kiribati at all because the winds and waves from the opposite direction as normal were so ferocious). Almost everywhere I went people remarked at the unusually low sea level that year, and that coral reefs were exposed that no one remembered seeing visible at low tide.

The figure above shows how the changes in sea level (black line) almost precisely match the global change in fresh water storage on land (dashed line), so this was not due to changes in snow and ice melting (which are at record highs in 2012 and will certainly greatly increase in the future, exacerbating the global sea level rise problem). Note this figure below does not include most of the bounce back afterwards.

How does this affect low-lying coastlines and global climate change mitigation and adaptation policy?

The implications are of global importance but most urgent for the low-lying islands of the Pacific.
Normally these islands flood at high King Tides twice a year, once around Easter and once around Christmas, when people walk calf deep through seawater. Their groundwater is contaminated with salt, and their bananas, taro, and breadfruit trees die, so now they can only grow coconuts. This flooding has gotten progressively worse as sea level rise, the islands subside, and their coral reefs are dying from global warming and new diseases. Last year the flooding was less than anticipated, but it was not clear why. I had suspected local changes in atmospheric pressure, winds, and waves, but the Boening et al. paper makes brilliantly clear that this was not a local phenomenon but a global pattern caused by a short term blip in the global water cycle that will reverse in the next El Niño, which is already starting.

In other words it is the exception that proves the rule, the calm just before the storm that is about to hit. We can now predict a very strong likelihood that King Tide flooding will be worse than normal this year and next, and in the years to come.

Arctic ice melting, Arctic land snow melting (which is now two times faster than melting of the sea ice), massive release of carbon dioxide and methane greenhouse gases trapped under melting Arctic permafrost peats, decomposition of formerly frozen peat (which contains twice as much frozen carbon as all the forests and vegetation in the world), and replacement of formerly white snow and ice-covered ocean and land by dark soil, rocks, and water, will all cause positive feedbacks that will greatly accelerate global warming and sea level rise.

The disastrous effects are only about to start kicking in, and no one should fool themselves that global sea level rise has halted because of this temporary event which will reverse quickly. The situation is far more serious and urgent than governments realize, and it is essential that the Small Island Developing States, and in particular, the low lying island nations, take the lead at UNFCCC in demanding effective global climate change mitigation and adaptation policies and funding.

Sadly, up to now we have simply been burying our heads in the sand, and future generations will pay a severe price for our folly because our policy makers and funding agencies have again been caught in the spotlight with their pants down. These inevitable effects will start sooner than we are prepared for, and there is little time left for them to come to their senses, end this farce, and act effectively for the future of our planet.

See my comments after the Cancun UN Framework Convention on Climate Change: Fools’ Paradises and Castles On The Sand: Coastal Erosion And Global Sea Level Rise