The 2021 Intergovernmental Panel on Climate Change (IPCC) Report is out, and while a clear improvement in recognizing the urgency of future climate change, IPCC unfortunately continues to ignore the fact that coral reefs passed the bleaching tipping point in the 1980s, and cannot take further warming, nor can tropical coastal communities take the further sea level rise that will result even if a minimum 1.5 degree warming goal is achieved.

IPCC continues to underestimate the importance of extreme heat events on both Tropical and Polar ecosystems and the urgent need to reduce GHGs to pre-industrial levels. The UN Climate Change Convention’s (UNCCC) resulting failure to act makes coral reef countries the first and worst victims of global climate change.

The map shows how extreme heat wave events are currently rapidly melting Arctic Ice from below, while record forest fires across Canada and Siberia dump black ash and soot on top of ice, speeding melting and triggering large positive global warming feedbacks that will accelerate the impacts in future years: 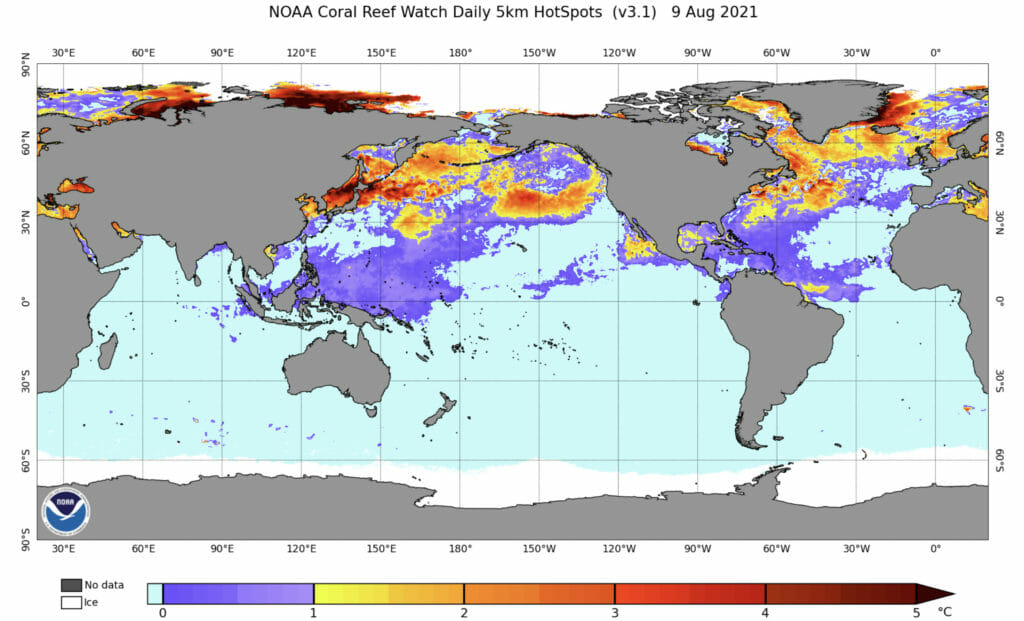 The 2021 IPCC report continues to ignore and underestimate the impending global warming extinction of coral reef ecosystems and habitats by lumping past and present damage with potential future impacts on less vulnerable ecosystems. 30 years after mass coral bleaching was shown to be caused by global warming, governments have not made UNCCC strong enough to protect coral reefs and coral reef islands from global climate change! Corals, coral reef ecosystems, and the species and people who depend on them are in imminent peril from business-as-usual fossil fuel greenhouse gas climate impacts. This tragic neglect caused most of the corals in the world to die from heat stroke since UNCCC was signed in 1992, as we warned would happen at that time.

For the future of coral reefs, the marine biodiversity and ecosystem services of more than a hundred countries, and billions of people living along eroding coastlines, it is urgent that significant funding be made immediately available for regenerating all climate change threatened coastal ecosystems: coral reefs, sea grasses, salt marshes, and mangroves. Sea walls have failed to the do the job for at least 7,000 years.

Without their invaluable ecosystem services there will be crippling losses of coral reefs, fisheries, beaches, and coastal economies throughout the rest of this decade and no hope of a sustainable Blue Economy or reversing global warming. Further delay will be increasingly fatal for over 100 coral reef countries and all coastal communities and port cities around the globe.