Land-Sourced Pollution with an Emphasis on Domestic Sewage: Lessons from the Caribbean and Implications for Coastal Development on Indian Ocean and Pacific Coral Reefs 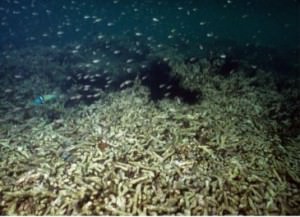 Abstract: This paper discusses land-sourced pollution with an emphasis on domestic sewage in the Caribbean in relation to similar issues in the Indian Ocean and Pacific. Starting on a large-scale in the 1980s, tropical Atlantic coastlines of Florida and Caribbean islands were over-developed to the point that traditional sewage treatment and disposal were inadequate to protect fragile coral reefs from eutrophication by land-sourced nutrient pollution. This pollution caused both ecological and public health problems. Coral reefs were smothered by macro-algae and died, becoming rapidly transformed into weedy algal lawns, which resulted in beach erosion, and loss of habitat that added to fisheries collapse previously caused by over-fishing. Barbados was one of the first countries to recognize this problem and to begin implementation of effective solutions. Eastern Africa, the Indian Ocean Islands, Pacific Islands, and South East Asia, are now starting to develop their coastlines for ecotourism, like the Caribbean was in the 1970s. Tourism is an important and increasing component of the economies of most tropical coastal areas. There are important lessons to be learned from this Caribbean experience for coastal zone planners, developers, engineers, coastal communities and decision makers in other parts of the world to assure that history does not repeat itself. Coral reef die-off from land-sourced pollution has been eclipsed as an issue since the ocean warming events of 1998, linked to global warming. Addressing ocean warming will take considerable international cooperation, but much of the land-sourced pollution issue, especially sewage, can be dealt with on a watershed by watershed basis by Indian Ocean and Pacific countries. Failure to solve this critical issue can adversely impact both coral reef and public health with dire economic consequences, and will prevent coral reef recovery from extreme high temperature events. Sewage treatment, disposal options, and nutrient standards are recommended that can serve as a reference point but must be fine-tuned to local ecology.