Within weeks after Alessandro Volta developed the battery in 1800, William Nicholson and Anthony Carlisle applied it to the electrolysis of water, producing hydrogen at the cathode and oxygen at the anode, and thereby showing that water was not an irreducible element, as had been thought, but a chemical compound made up of two elements with very different properties. It was quickly found that adding salts to the water greatly accelerated reaction rates. We now know this is caused by increased electrical conductivity and reduced resistivity, thereby increasing the electrical current flowing for a given applied battery voltage according to Ohms’s Law. Humphrey Davy soon applied electrolysis to the practical problem of oxidative corrosion of copper plates used to sheath ships and protect the wood from boring organisms, founding the field of galvanic protection of metals from corrosion, now widely used to protect steel ships, oil rigs, bridges, and subsea pipes from failure. Seawater electrolysis for galvanic protection can use sacrificial anodes, driven by the voltage potential difference between different metals, or actively impressed currents driven by a battery or a direct current power supply. In the first case the voltage differences are small, usually only tenths of a volt, according to the difference in electromotive potentials of the various metals or alloys used. The metal acting as the cathode is completely protected from rusting and corrosion as long as the electrical current flows. The metal acting as the anode usually dissolves away as the reaction proceeds, and needs to be periodically replaced in order to continue to prevent corrosion of the cathode. Increased currents accelerate reaction rates, which can cause mineral growth or scale, something most uses of cathodic protection wish to avoid. For example, if a boiler is being cathodically protected from rusting, one does not want to precipitate a mineral scale layer on it, because that is less thermally conductive than the metal, and reduces heat transfer and boiler efficiency. Therefore most uses of cathode corrosion protection use the lowest possible voltages and currents needed to prevent rusting, in order to avoid growth of scale.

There is a “natural” analog of cathode protection that is crucial for marine archaeology. A shipwreck invariably contains objects of several different metals, such as various steel alloys, copper, brass, bronze, aluminum, and others. The metal that acts as the strongest anode, according to its electromotive potential, proceeds to dissolve, releasing electrons that flow to the cathode metals, protecting them from oxidation. When the anode has completely dissolved, the next metal in the electromotive series then plays that role until there are no more anodic metals left, and at that point corrosion can take place on the last cathode metal. The process causes growth of limestone scale on the cathode, which protects and conceals it. Metal artifacts preserved in marine shipwrecks have been protected because they acted as cathodes. Despite the popular image of treasure hunters finding shiny golden coins, in fact the treasure is completely encrusted in limestone, appearing as irregular white crystalline lumps with the metal surface completely concealed. The first thing marine archaeologists do with these lumps is to throw them into an acid bath to dissolve away the limestone, in some cases speeding the process up by wiring them up as an anode of a battery, although that risks destroying the artifact if it proceeds too far. Only once the limestone has dissolved can the archaeologist see the metal artifact.

Later applications of aquatic electrolysis included making chlorine and bleach (sodium hypochlorite) from seawater and chloride brines, and purification of metals, but largely under highly controlled conditions in limited volumes, often from fused salts or acid solutions rather than from seawater. Following the First World War, the Nobel Prize winning German Jewish chemist, Fritz Haber, whose work on industrial nitrogen fixation via the Haber-Bosch process is the basis for almost all fertilizer nitrogen production, and hence for our global food supplies, sought to use electrolysis of sea water to extract traces of gold from the ocean to pay back war reparations imposed by the victors. He found that concentrations were too low to be economic, and was then hounded to death by the Nazis.

Michael Faraday was the first to precipitate solid minerals by electrolysis of seawater. It was not until 1976 that Wolf Hilbertz recognized that these minerals, under the right conditions, could be a resource rather than a problem to be avoided. Hilbertz, an innovative architect working on self-growing construction materials, experimented with electrolysis of sea water and discovered that by varying the voltage and current applied he could grow different minerals on the cathode, ranging from soft to hard (Hilbertz, 1979). His inspiration was biological: if marine organisms could grow shells and skeletons of precisely controlled architecture from minerals dissolved in seawater, we should be able to figure out how to do so as well. Limestone does not precipitate naturally from seawater, so marine organisms must use their metabolic energy resources in order to create special internal chemical conditions that cause shell growth.

Hilbertz found that under low electrical current conditions he could grow extremely hard calcium carbonate limestone deposits, made up of crystals of the mineral aragonite, the same compound that makes up coral skeletons and the bulk of tropical white sand beaches.

Higher currents caused the growth of the mineral brucite, or magnesium hydroxide, which is soft and tends to easily break off. Through experimentation it proved possible to grow rock-hard limestone coatings of any desired thickness on steel frames of any desired shape or size, at up to 1-2 cm per year, with compressive (load-bearing) strength up to 80 Newtons per square millimeter (MegaPascals), or about three times the strength of concrete made from ordinary Portland Cement.

This material, which Hilbertz first called “Seacrete” or “Seament”, is now called “Biorock®” in order to emphasize that this is the only GROWING marine construction material that gets larger and stronger with age, and is self-repairing, like biological materials, but unlike any other marine construction material. This unique property causes any damaged or broken portion to grow back preferentially overgrowth of undamaged sections. 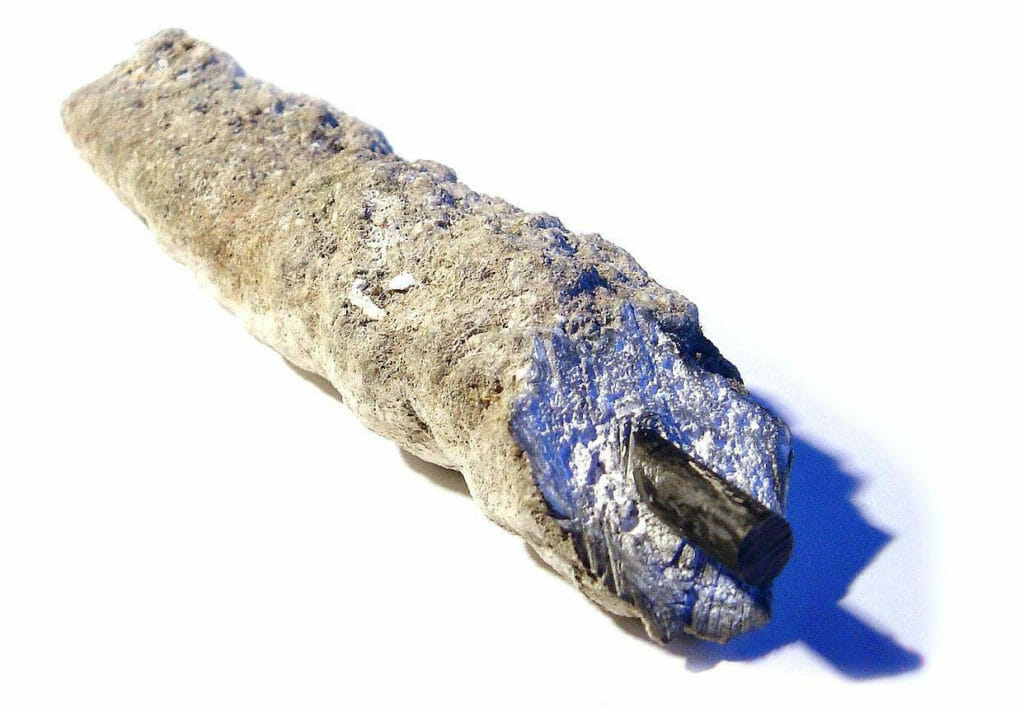 Figure 1. Biorock materials grown at Ihuru, North Male Atoll, Maldives, around a 6mm diameter steel bar in approximately one year. The darker surface color is a thin film of dried algae that migrates on the surface as it grows outward, leaving the interior bright white. The piece was hacksawed out of a growing structure. There is no corrosion at all on the steel. Photograph by Wolf H. HIlbertz. 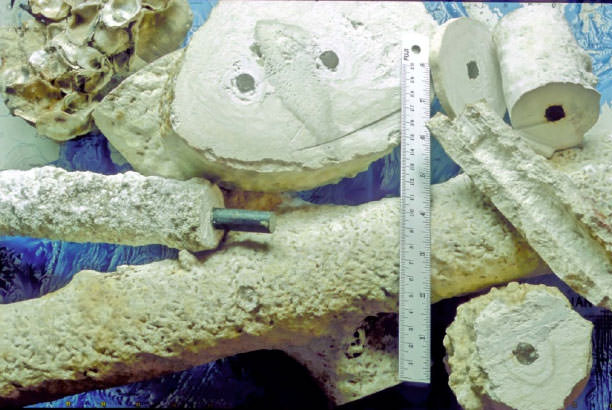 Biorock materials from various locations. The piece at mid-left is the one shown in the previous photo. The one at top-left, completely overgrown with oysters, is from Louisiana, and all the rest were grown in a two and a half year period at Ihuru Island, North Male Atoll, Maldives. Samples tested from that set of samples in the Materials Testing Laboratory of the University of Graz, Austria, had the compressive strength of 60-80 Mega Pascals, around three times the load-bearingg strength of ordinary Portland Cement concrete. Photograph Wolf W. Hilbertz. 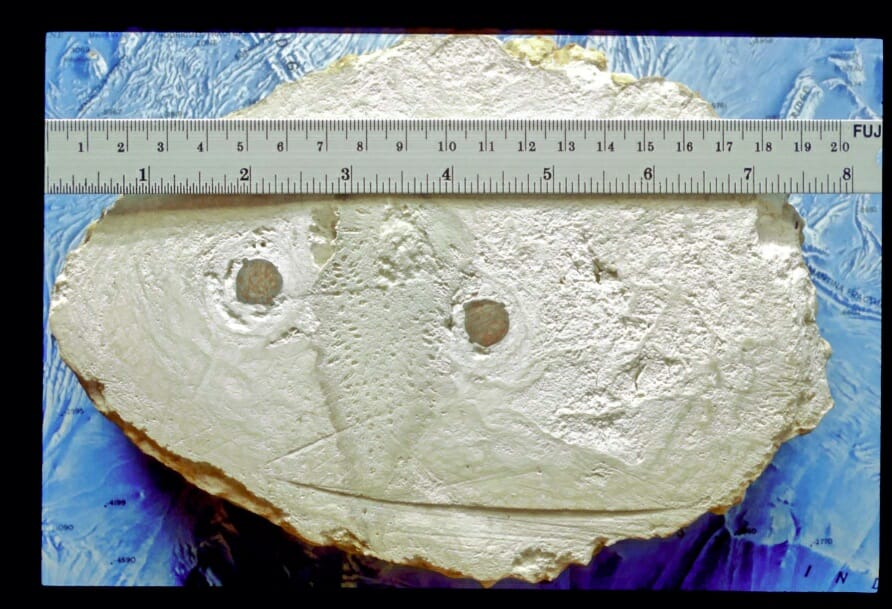 Figure 3. This piece was cut near where two steel bars crossed. We had wedged a coral between the bars after a few months of growth. The coral skeleton is the slightly darker vertically oriented area in the center. After 2.5 years it was completely overgrown and encased by electrochemically produced minerals. Photograph Wolf H. Hilbertz. 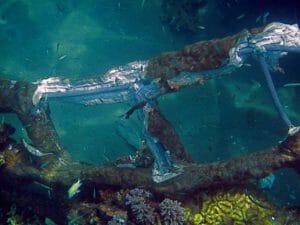 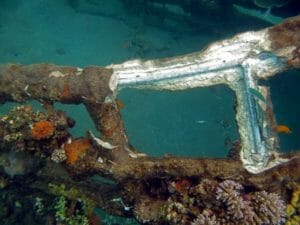 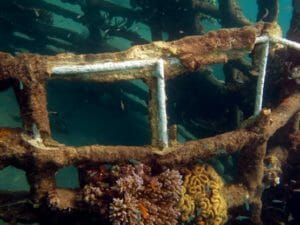 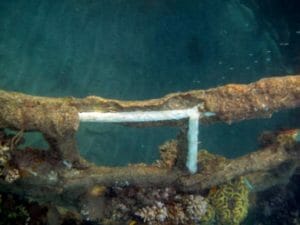 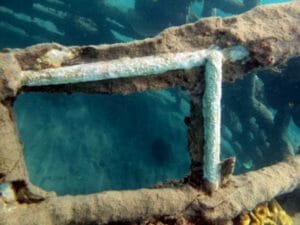 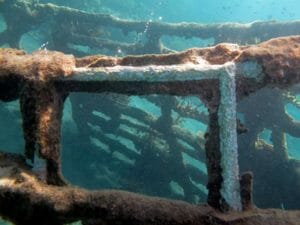 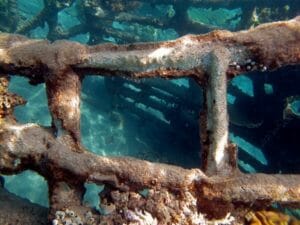 Figure 4. Self repair of Biorock damaged by big boat impact. Time series photographs by Rani Morrow-Wuigk. This structure was installed in June 2000. Note there is no rust on the steel after nearly 11 years
in seawater.

Unlike the steel, the minerals are poor electrical conductors, and act as partial insulators. Nevertheless, electrons continue to flow because of the imposed electrical gradient. Although the electrolytic reactions generate hydroxyl ions and alkalinity in the water that are neutralized by mineral deposition taking place at the surface of the metal (see next section), production of hydrogen gas at the cathode surface causes creation of tiny pores and channels from the metal surface to the seawater, out of which hydrogen bubbles emerge (such bubbling provides visible proof that the reaction is working properly). Even Biorock material with three times the load-bearing strength of ordinary concrete has around 20% porosity. While it might be thought that minerals might insulate the cathode and prevent further growth, the imposed electrical gradient ensures that growth continues, in part because electrons flow through the hydrogen escape pores. We observe no long-term decrease in the rate of bubbling or the growth of minerals, even in cases where more than 30 cm of hard minerals have grown over the cathode.

When the mineral growth is broken off, whether by severe storm wave damage, boat impacts, or deliberately by pliers, hammers, or hacksaws, and the bare metal is exposed, there is greatly increased growth at that point, until the newly deposited minerals are as thick as adjacent unbroken material. The metal is all at the same voltage potential, but reduced or absent mineral coatings cause the increased electrical current and mass transfer to flow through the water at that point. When the newly grown material is as resistive as the old coating the increased growth rate is self-limiting. In some cases new material is more porous due intense hydrogen bubbling, and the repaired area may grow thicker than adjacent harder and less porous material. We first recognized this focusing of current to freshly exposed surfaces in an experiment using multiple lengths of rebar as cathodes. We would periodically remove one rebar in order to measure the thickness of the material growth, replacing it with a fresh rebar, in an attempt to measure long-term growth rates and changes in chemical composition. The bare steel surface focused the current on the new rebar, which grew at the expense of all the others, stopping their growth. While the experiment did not work as intended, it provided valuable insight into the process.