A review of John Todd, 2019, HEALING EARTH: An ecologist’s journey of innovation and environmental stewardship 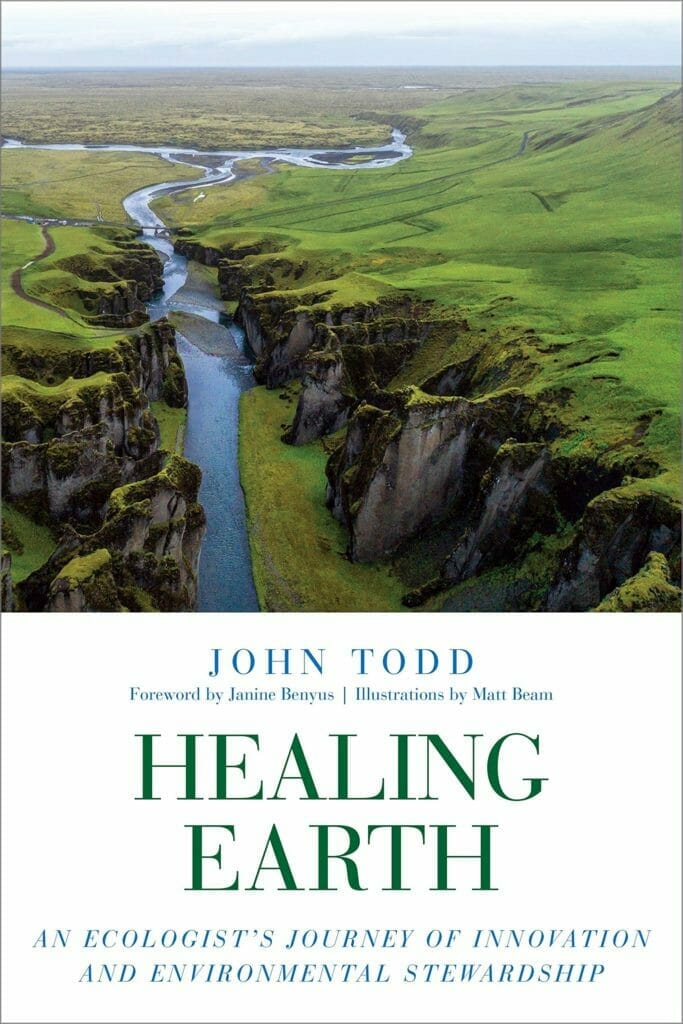 Ecosystem restoration pioneer John Todd begins his new book with “I am writing this book based on the belief that humanity will soon become involved in a deep and abiding worldwide partnership with nature. Millions of us will commit ourselves to reversing the long legacy of environmental degradation that threatens to destabilize the climate as well as the great ecologies that sustain life on Earth. We must develop a vast stewardship initiative, which will become the great work of our time. Fortunately, there are as many ways to serve the Earth as there are people willing to engage in this vast restoration project. It includes nothing less than stabilizing the planet’s climate as well as saving ourselves.”

There’s a one word term for Healing Earth: Geotherapy, regenerating the planet’s natural life support systems, like a doctor prescribes a cure to restore a sick patient to health based on a sound assessment and diagnosis. In his Foreword to the 2015 book Geotherapy: Innovative Methods of Soil Fertility Restoration, Carbon Sequestration, and Reversing CO2 Increase (T. J. Goreau, R. Larson & J. Campe. Eds.) John Todd pointed out “Our future as a civilization may depend on returning to our roots and the mineral as well as the organic materials that sustain them……. Perhaps we could use carbon a universal currency. People around the world could be paid to capture and sequester carbon, particularly in soils……Carbon sequestration is a global public good”.

Tragically, our political and economic institutions have been incapable of rewarding people for doing the right thing for everyone’s benefit! As Todd’s important new book makes clear, with examples of whole ecosystem regeneration using rock powders and biochar to nurture much more productive and diverse ecosystems in very different settings, the methods exist to do the right thing and regenerate the planet. There are many more such methods that have been developed for every habitat. Sadly, they are not being used on the scale needed only because of the ignorance, or lack of will, of those in charge.

The failure of policy makers to learn the wisdom of those nurturing the Earth is tellingly revealed when John Todd describes how they began with a dead canal full of oil, and turned it back to prolific life, only to have funding to monitor the results ended by the Environmental Protection Agency. He points out “Sadly, we no longer have the resources to study the details of the transformation in the canal in a measurable scientific way. The only instrument I can use are my own eyes. There is a vibrancy in the water and on the water, and I can see that the living technology continues to support the ecosystem in the canal, proving its cost-effectiveness year in and year out”. Most restoration pioneers have the same experience, everyone can see their results, but they lack funding for tools to measure and “prove” them, except for photographs.

John Todd ends his book with: “The possibility of a whole generation becoming environmentally literate and capable of engaging directly with the land is heartwarming. I have spent most of my life working with small, dedicated groups around issues of Earth stewardship. I feel very, very blessed to have been able to do so. But I look forward to the day when the Earth is truly green: when deserts are diminishing, forests growing, grasslands thriving, the inshore oceans are a cornucopia of healthy foods, and, most importantly, when human beings understand their role on Earth. There will be a time when carbon dioxide in the atmosphere is declining and climate is becoming more stable. The Earth is a bountiful place. This fact is my source of inspiration.”

How to get there is the real challenge for the rest of this century. Todd envisions 25 year re-generational cycles in which productive soils are grown, and polluted waters healed, generating new goods and services for future generations. He envisions “NGOs, philanthropy, and governments” as playing key roles in kickstarting the regenerative process. NGOs have the knowledge of how to implement these solutions, but until the financial and government sectors open their minds, learn from their mistakes, and join global regeneration efforts, their hands are tied behind their backs. Will enlightenment happen in time?