Article on Lifestyles of Health and Sustainability – Floating Island 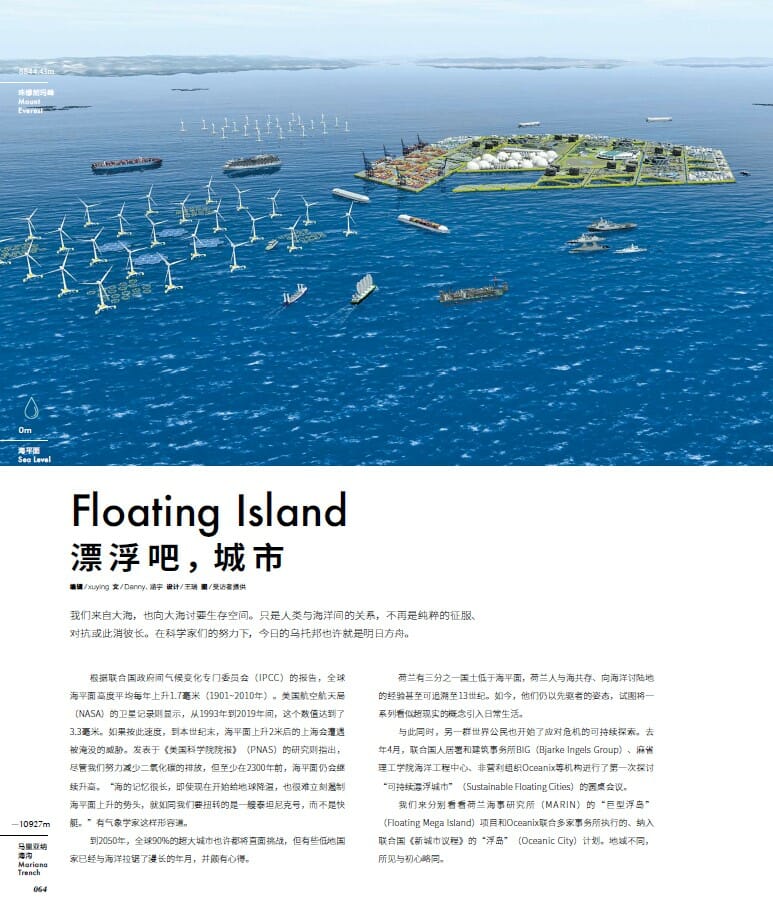 Life comes the sea and we are asking it for living space. The relationship between humans and the ocean is no longer pure conquest, confrontation or trade-offs. With the efforts of scientists, today’s utopia may be the ark of tomorrow.

According to the report of the United Nations Intergovernmental Panel on Climate Change (IPCC), the global sea level has risen by an average of 1.7 mm per year (1901-2010). NASA satellite records show that from 1993 to 2019, this value reached 3.3 mm. At this rate, by the end of this century, Shanghai will be under threat of being submerged after a sea level rise of 2 meters. A study published in the Proceedings of the American Academy of Sciences (PNAS) pointed out that despite our efforts to reduce carbon dioxide emissions, sea levels will continue to rise at least 2300 years ago. “The memory of the sea is very long. Even if we start to cool the earth now, it is difficult to immediately suppress the momentum of sea level rise, just like we want to reverse a Titanic, not a speedboat.” Said by a meteorologists.

By 2050, 90% of the world’s megacities may be facing the challenge, but some low-lying countries have been sawing the ocean for a long period of time, and they have learned something.

One third of the Netherlands is below sea level, and the Dutch’ experience of coexisting with the sea and seeking land from the sea can be traced back to the 13th century. Today, They are still pioneer, trying to introduce a series of seemingly surreal concepts into daily life.

At the same time, another group of citizens of the world has begun a sustainable exploration to deal with the crisis. In April last year, UN-HABITAT and the architectural firm BIG (Bjarke Ingels Group), the Massachusetts Institute of Technology Marine Engineering Center, and the non-profit organization Oceanix conducted their first discussion on “Sustainable Floating Cities” Round table.

Let’s take a look at the “Floating Mega Island” project of the Netherlands Maritime Research Institute (MARIN) and the “Floating Island” (Oceanic City) that was implemented by Oceanix and a number of firms and included in the UN’s “New City Agenda” plan. The geography are different while the original ideas are similar.

Building blocks on the sea

In today’s Netherlands, about one-fifth of the country’s land is obtained from land reclamation and there is also the saying “God makes sea, Dutch make land.” The project of “Floating Mega Island” is an evolution from make land to build islands.

The so-called “islands” here are actually modular systems that can be used to build floating buildings. Each buoy with a width between 45 and 100 meters is spliced ​​and connected in a modular manner, which can be “organically” expanded according to different needs and finally form a sea floating structure similar to an artificial island. Flexibility is its biggest feature, which is like building blocks at sea to extend the existing geographical space in case of undesirable extension.

However, the scientists of the project represented by William Otto want to achieve not only to build a man-made floating island in the traditional sense, but also to be able to carry all the key functions of modern urban life, including logistics and electricity, animal and plant cultivation and crowd living. Each batch of pontoon assembly can be regarded as a sub-project, serving one of the above-mentioned single functions. Eventually, when all sub-projects are completed, the entire floating island will become a modern integrated body with complete functions. This also means that the giant floating island is a project that requires differentiated expertise such as fluid mechanics, marine life, urban planning, law, and social psychology.

In theory, all functions that can be operated on land can also be performed on floating islands. However, there is available only to see some small floating island communities now and in order to further repeatedly verify the complexity of scale and function, scientists will continue to carry out on-site assembly and testing in the next few years.

Such forward-looking scientific research projects inevitably have a sense of alienation from our lives and are closer to the dream in our minds, but it does provide a starting point for the development of new cities. For example, as the floating island functions of the two hubs of logistics and energy become more and more perfect, more and more people will need to move from land to live on the island.

The significance of the giant floating island is probably to use rational and scientific thinking to improve our knowledge system on environmental issues and reduce helplessness and vulnerability when faced with natural invasion. We asked Otto: Is science an effective way to improve our coping ability? “The word “science” comes from the Latin scientia, which means knowledge.” He said.

While exploring the feasibility of maritime space, will it destroy the existing marine ecosystem and invade natural water resources?

Otto admits that this is an important question, but right now, his team is still exploring the answer. “I think that before the first offshore field installation test, sufficient preliminary considerations and protection measures should be taken. As mentioned above, the floating island is based on large-scale assembly of individual buoys. Therefore, the experiment began since the entire project was relatively small-scale. We have carefully monitored the impact of the project on marine life and every time the floating island area is expanded, this monitoring has never been interrupted.”

In fact, the Dutch have a straightforward and clear understanding of the importance of water. “As a Dutchman, my childhood memory was playing on the lake and levees, sailing has always been one of my favorite ways of leisure. Globally, the four oceans connect seven continents. The Netherlands has for hundreds of years have always benefited from this connection. Even now, our economy depends on these maritime connections, so yes, you can say that water is very important for me and my country.” Otto said. For him, water is a vivid and vital existence.

Compared with the continuous investment and effective governance of the Netherlands for centuries, many countries and regions still lack effective measures to protect their settlements from disasters caused by environmental changes.

Looking for a solution to the harmonious coexistence between humans and the ocean is Chen’s original mind for the past decade. This island citizen has seen the signs of rising seas more clearly than most inland people. His experience as the French Polynesian Minister of Tourism also made him care about the needs of people while caring for the environment. Two years ago, he founded Oceanix, using sustainable floating islands (floating cities) to carry the sustainable pursuit of living, energy, water and food.

To create this sample, Chen gathered the world’s top team of architects, engineers, sustainability experts, artists and scientists to jointly realize this “Noah’s Ark” enter the ocean in friendly way.

The most important base part of the “floating city” uses the Global Coral Reef Alliance’s ecological rock technology called Biorock; the Center for Zero Waste Design, which focuses on sustainable construction, Studio Other Spaces and Transsolar, which care about light, climate and energy also participated in the design and construction of the “urban space”; the planning of infrastructure and transportation modes were supported by Sherwood and MIC, respectively.

The “floating city” was conceived as a self-sufficient sustainable ecosystem. The developers analyzed the sources and utilization status of energy, water, food and waste in various countries and regions and designed six sustainable solutions to realize the recycling of resources from different dimensions. At the same time, the building materials of the “floating city” also use local resources, such as the fast-growing bamboo, which has six times the strength of steel without harming environment, showing the power and beauty given by nature.

As a future expansion part of a large coastal city, “floating cities” can be prefabricated on the shore and transported to the coast. Chen said the next step is to build the first model. They are in consultation with several local governments and are expected to commission the most vulnerable tropical and subtropical regions. The first test destination will be announced soon.

Talking about the future of “floating cities”, Chen believes that this is one of the answers for coastal areas in the world to deal with sea level rise. Compared with land reclamation, it has a faster layout and lower construction costs. The most important thing is more environmentally friendly. When the plan realized, he hopes that it will be borne and used by all the regions where it is needed. “It should not be a privilege of a certain group of people.” Chen said.

Shared mobility and active modes for an integrated, mixed and productive community with reduced transportation demand.