Article on Lifestyles of Health and Sustainability – Saving Coral Reefs 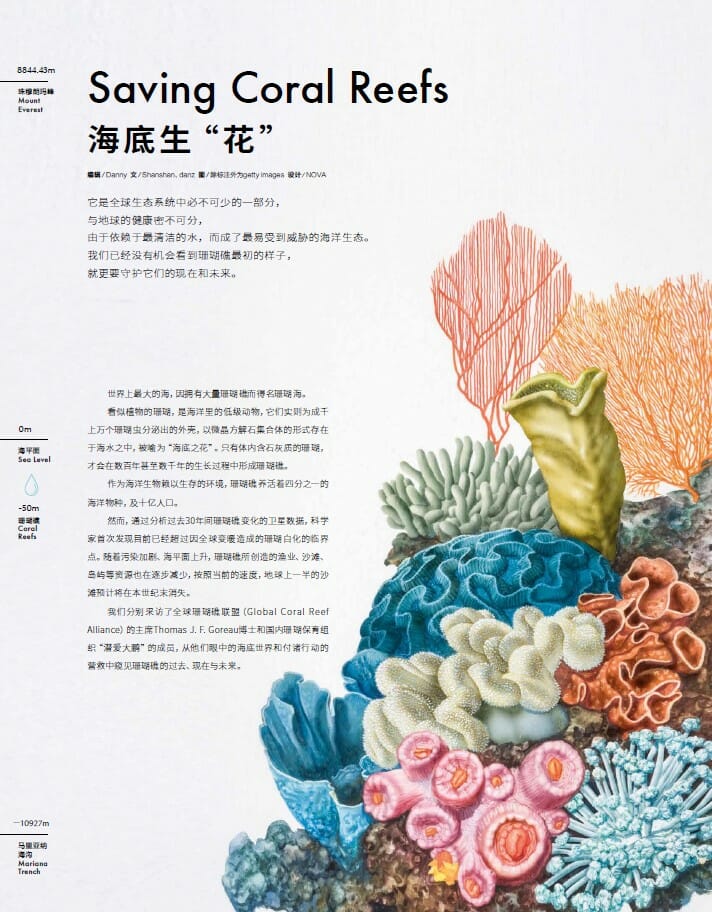 Coral reefs, relying on water, is sensitive and vulnerable. The subtle changes of the temperature, salinity, light intensity and clarity of seawater can lead to coral bleaching, even the death of coral reefs.

The earliest human research and conservation of coral reefs date back to one century ago. In 1920, a professional team from The University of Cambridge, Great Barrier Reef Expedition, investigated the Great Barrier Reef. Twenty years later, the Bikini Atoll Scientific Resurvey conducted ecological and biological research through SCUBA diving. Their study was the first and the longest-lasting one in history. They produced the first, high-quality, colored images of the undersea world.

Dr. Thomas told us that the photos were taken by his grandfather in Bikini Atoll in 1946. Following the steps of his family, Dr. Thomas now serves as the president of the Global Coral Reef Alliance (GCAR). This is a non-profit organization founded in 1990 and formed by worldwide volunteer scientists, divers, environmentalists and other individuals and organizations. With a primary focus on coral reef restoration, GCAR studies and works on this marine ecosystem.

“In fact, many researchers diving underwater have already lost the opportunity to investigate the pristine marine environment. The coral reefs that researchers investigated are already severely destructed, so it is very likely that the researcher would underestimate the coral reef that we have lost.” Luckily, GCRA has preserved the largest and the oldest collection of underwater photographs of coral reefs around the world. It records the coral reefs during the 1940s, 1950s and 1960s and documented the original ecological studies of coral reefs through diving. “We are searching for funds to scan all the photographs, correct the colors for fading, and post them as a visual archive of a lost world that will never be seen again,” said Dr. Thomas.

This year a major documentary film, Coral Ghosts, will be released by the Canadian Broadcasting Corporation on long term change in coral reefs around the world. Based on these historical photographs, the Canadian director Andrew Nisker directed two-year filming sessions in Jamaica, the Marshall Islands, Indonesia, the Great Barrier Reef, and the Canadian Arctic. The film intends to raise people’s awareness of coral-reef protection.

Leading the Coral reef protection for the UN Framework Convention on Climate Change, GCRA and some island countries propose protocols on climate change in order to deal with the threats on coral reef, islands and coastal areas caused by global warming and sea-level rise. BiorockTM Technology is the only effective method to save the endangered coral reefs.

In 1987, Dr. Thomas invited Wolf to come to Jamaica to work with him to develop applications for coral reef restoration, and they decided to call the technology Biorock™, because it not only grew hard limestone rock for structural purposes, it greatly increased growth of corals and all marine organisms. They founded the GCRA to pursue research and development of Biorock™ Technology.

Biorock uses safe, very low electrical currents, which greatly increase settlement, growth, survival, and resistance to extreme stresses from temperature, mud, and pollution, of all marine life. All other coral reef restoration methods work well only under perfect water quality conditions. In contrast, Biorock™ grows coral 2-10 times faster. Corals growing on Biorock™ reefs have 1600% to 5000% times higher survival after severe bleaching than corals on nearby reefs. The electricity needed is provided by renewable sources, such as the sun, wind and sea.

First used in Jamaican coral reefs, this technique is now implemented at around 600 coral reefs in 44 countries all around the world. Moreover, Biorock stimulates all marine ecosystems, seagrasses, oysters, salt marshes, mangroves, fish and shellfish habitat, etc. In Indonesia, GCRA worked with their local partners, Biorock Indonesia, to build around 500 coral reefs and found that, while restoring the coral reefs, the number, size and diversity of the fish in the nearby fishing protected areas also increased significantly. In the Maldives, the Biorock™ reef created a new, 15 meters long beach in 2-­3 years. The beach has remained stable for more than 15 years. When the Asian Tsunami washed right over the island, the beach and reef were not damaged.
“We would like to work with worldwide local groups to use Biorock™ technology to save more coral reefs.” The project submitted to the GCRA website will be seriously evaluated to develop the most cost-effective solutions. Dr. Thomas hopes that every marine country would save fortunes using the Biorock technology instead of the conventional methods of coastal defense and management that have failed disastrously. Fishermen can become farmers growing back entire ecosystems full of life instead of killing the last wild fishes.

“For every reef we regenerate, thousands are dying!” The efforts of Dr. Thomas and his teams are competing with the speed at which the coral reefs are disappearing. “There is very little time left to save what is left,” painfully said Dr. Thomas. Future human health depends on environmental health. Regenerating our planet’s natural life support systems is becoming more and more urgent nowadays.