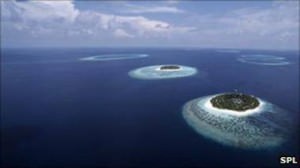 The world’s governments have doomed coral reefs through their continued failure to act here in Cancun last night. 2010 set record high global temperatures, and along with the previous record, 1998, had the worst coral mortality from heat stroke. Massive coral bleaching and death took place across the entire Indian Ocean, Southeast Asia, West Pacific, Caribbean, and Persian Gulf. Coral reefs have not recovered from global mass mortality in 1998 and all the hot years since: each record hot year has less remaining corals to kill until they are essentially all gone. The Global Coral Reef Alliance (GCRA) accurately predicted all locations where serious coral bleaching took place very early in 2010:

Refusal by the world’s governments to control greenhouse gas emissions now guarantees that almost all remaining corals will die from heat stroke in the next few years. The imminent global warming-caused extinction of coral reef ecosystems will destroy the vast bulk of the marine biodiversity resources, shore protection, fisheries, and tourism of over 100 countries, with many more low lying islands to vanish in the coming decade.

The GCRA long-term global coral reef satellite sea surface temperature database suggests strongly that 2010 and 2011 is a jump year. It is widely, but incorrectly, thought that temperature rise should be uniform, but in fact it proceeds by jerks upward every time that ocean circulation slows down by a tiny amount, leveling off around new record levels until the next jump upwards. Such jumps took place around 1978, 1987, 1998, roughly every decade, and this year and next almost certainly are another. That is to say, coral heat stroke death will get worse.

In fact, we must warm up the entire deep ocean before we feel the full effect at the surface, so we have not yet felt the impacts of the excess CO2 already in the atmosphere. When we do, temperatures and sea levels will be MUCH higher than IPCC models predict, because their politically-motivated mandate sets a time frame for prediction that is much shorter than the actual climate system response. It misses around 90% of the long-term response, giving a falsely low prediction of the actual long-term changes we have set in motion.

The equilibrium sea level for TODAY’s CO2 concentration is 23 meters, or 75 feet, higher than today’s values, based on millions of years of ancient climate records from the deep sea, Antarctic Ice Caps, and fossil coral reefs. If CO2 is allowed to continue rising, as Cancun’s UNFCCC failures guarantee, it will get MUCH higher than that in future years. Governments have simply chosen to fool themselves about the magnitude of the problems facing our planet’s life support systems. But they can’t plead ignorance because the data is widely available and crystal clear in its implications:

While refusing to discuss the real problems, governments also chose to ignore the solutions, which are well known but just not being used. Methods to keep reefs alive from high temperatures, and grow back severely eroding beaches are ignored by governments and funding agencies. The photo at the top, widely used by the BBC News as an icon of climate change, shows Ihuru and Vabbinfaru Islands, North Male Atoll, Maldives, the very islands where GCRA “Biorock” restoration projects grew corals 2-6 times faster than normal, had up to 50 times higher coral survival than surrounding coral reefs in 1998, and grew back 50 feet of new beach in a 2 years at a site where severe erosion was causing trees and buildings to collapse into the sea. This beach, and reef, survived the Asian Tsunami that passed right over the island, without damage. Yet the Maldivians have not used the solutions developed in their country to save themselves.

Earlier this year GCRA Biorock coral reef restoration projects at Arno Atoll, Republic of the Marshall Islands, showed that only a tiny fraction of the island’s completely untapped wave, tidal current, wind, and solar energy resources could save the islands from disappearing:

In cold waters Biorock methods greatly increase the growth and survival of oyster reefs and saltmarshes under severe stress, allowing them to be grown under conditions under which they normally could not survive. Such methods could be used to grow back the oil-killed oyster reefs and saltmarshes in Louisiana, where the coast is vanishing at up to a hundred meters a year:

The ludicrous lie that coral reefs are “resilient” ecosystems is widely touted by governments, funding agencies, and the big international NGOs, claiming that coral reefs will bounce back by themselves from any damage, and therefore we should do nothing at all. Meanwhile governments and funding agencies refuse to act to solve the problems they won’t admit exist, or to use proven methods to grow back endangered reef ecosystems, fisheries, and beaches.

The systematic failure of the world’s “leaders” at UNFCCC to seriously solve our real long-term problems knowingly ignores a wide range of proven, cost effective, innovative but ignored technologies that together can reverse global warming and stabilize CO2 at safe levels. They restore the natural mechanisms that regulate global CO2, temperature, sea level, and water resources, while at the same time reducing excess CO2, producing clean energy, and greatly increasing the fertility of soils and the productivity of agriculture, forests, coral reefs, and fisheries.

These life-saving technologies are outlined in THE GREEN DISC: NEW TECHNOLOGIES FOR A NEW FUTURE, a 40 chapter multimedia DVD launched at the 2009 UN Climate Change Conference in Copenhagen:

A much larger edition was to have been launched in Cancun, but GCRA was prevented from participating or circulating it, apparently part of a larger pattern:

The new 2nd Edition will instead be posted for free download on the web once sponsors can be found. It will provide details on practical solutions that can be implemented by people all over the world to reverse the damages caused by greed and stupidity and put our planet on a sustainable course for the future.

Here in Cancun, no matter how much finger pointing went on by delegates, blaming each other, there was in fact complete unity by all world’s major fossil fuel consuming and producing countries to prevent any serious action on greenhouse gases or to prevent runaway global climate change from destroying our planet’s future. If they succeed, coral reefs will be the first ecosystem to go functionally extinct, but they will not be the last. Sadly, those causing the problem have bribed or forced almost all of the victims to agree to their own death sentence and suicide pact. Astonishingly most have complied: short-term greed by our “leaders”, with only a handful of exceptions, has outweighed any sense of long-term responsibility for their people, natural resources, or future.