The death of “resilience”: Hurricane recovery of coral reefs destroyed by global warming, pollution, and pathogens

The remaining coral reefs of Barbuda, Saint Barthelemy, Saint Martin, Anguilla, Tortola and the British Virgin Islands, Grand Turk, Cuba, Dominica, and Puerto Rico have all been devastated in recent weeks by direct hits from the eye of the strongest hurricanes on record. Having dived extensively around all of these islands except for Anguilla, none of these areas had remaining shallow reefs in good condition before the event. The question now is how quickly they will recover?

The first study of hurricane impacts on coral reefs was after Hurricane Charlie, which devastated Jamaica in 1951, and tore the roof off of our home. After the hurricane, my father dived in the reefs and found large areas of shallow elkhorn and staghorn coral smashed to rubble, and large old coral heads cracked and toppled (Goreau, 1956). By the mid 1950s, about half of the reef had grown back (see photo below), and by the late 1950s there were almost no traces of the damage visible because vigorous coral settlement and growth rapidly colonized the damaged areas.

That is why we always said that healthy coral reefs could recover from near-total hurricane devastation in a decade or so (Goreau, Goreau, & Goreau, 1979). But Jamaican coral reefs never recovered from Hurricane Allen (1979), Gilbert (1989), and Ivan (2004) because by then the coral reef ecosystem’s intrinsic internal biological resilience had already been destroyed by stresses exceeding their capacity to adapt.

Bob Trench, Belize’s most famous scientist and the world’s top expert on coral symbiosis and I have recently looked at the oldest underwater photographs of Belize coral reefs taken in 1968, 7 years after the worst hurricane in Belize history, Hurricane Hattie, had devastated Belizean coral reefs and mangroves (Stoddart, 1963). These include the reefs that Bob grew up on fishing before Hurricane Hattie. The elkhorn and staghorn zones had already largely recovered at that point. So in the 1960s, Belize reefs, like Jamaican reefs in the 1950s, were still able to recover from devastating physical damage in a decade.

Recovery on this scale is now completely impossible because global warming, nutrient pollution, and diseases have degraded or destroyed the capacity of the most critical ecosystem framework-building coral species to survive or recover from. Dead areas destroyed by hurricanes now stay dead, are overgrown by weedy algae indicating sewage pollution, or are colonized by communities of weedy coral species, which most people confuse with real coral reefs because they have never seen one.

The old massive coral reef walls that surrounded most Caribbean islands when I was a boy still remain as a dead reef in only a few lucky spots where they have not yet been torn apart by bio-erosion and wave forces, but they have completely vanished in most places, where there is no trace remaining of the magnificent reefs that once stood there.

Coral reefs were resilient and would spring back in devastated areas on decadal scales in the old days only because there was no human-caused climate change, pollution, and new diseases. That was because devastation by storms or dredging were brief in time and space, and damaged areas grew right back from the healthy reef all around the damaged areas. Now there is no healthy surrounding reef, and no spatial or temporal refuges left from high temperatures, pollutants, and pathogens that are accelerating everywhere.

It is time that the bogus fraud of “coral reef resilience” be buried forever. This vile lie, based on invincible ignorance of fundamental coral biology, has been pimped for the last 30 years by governments and Big International NGOs (BINGOs) in order to prevent efforts to eliminate the real root causes of coral reef destruction, and to prevent serious efforts to restore them, thereby deliberately sentencing coral reefs to death from preventable causes. 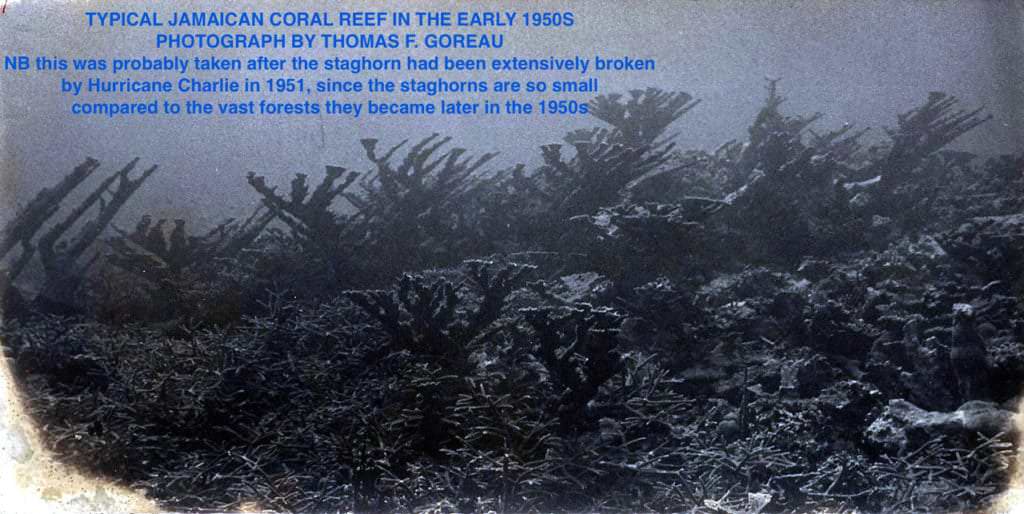