An exceptionally healthy coral reef directly in front of the Panama Canal breakwater is threatened by dredging for the new Isla Margarita Port Terminal. Unless strict measures are taken to prevent mud from getting out of the Eastern Channel onto the adjacent coral reef, Panamanians stand to lose this habitat that is part of their national heritage.

Environmental impact assessments made for the port development only considered dead previously dredged areas inside the breakwater, and completely ignored the healthy coral reefs less than a hundred meters away, connected by an open channel to the dredging and landfill sites.

A survey by the Global Coral Reef Alliance (GCRA) and the Galeta Marine Laboratory of the Smithsonian Tropical Research Institution (STRI), at the request of Centro de Incidencia Ambiental (CIAM), found a healthy coral reef with high living coral cover right in front of Isla Margarita and the eastern end of the Panama Canal breakwater. These reefs are not mentioned anywhere in the port’s Environmental Impact Assessment (EIA): the EIA mentions only dead habitat in the area, which would not be affected from dredging nearby. The living coral reefs are only about 100 meters away from the Port dredge and filling operations.

This reef is close to the Isla Galeta Protected Area, and strong measures are needed to protect the highly vulnerable corals from suspended sediments.

This report, and the photos and video attached to it, describes the health status of this extraordinary reef (figures below) and the measures needed to monitor and protect it. 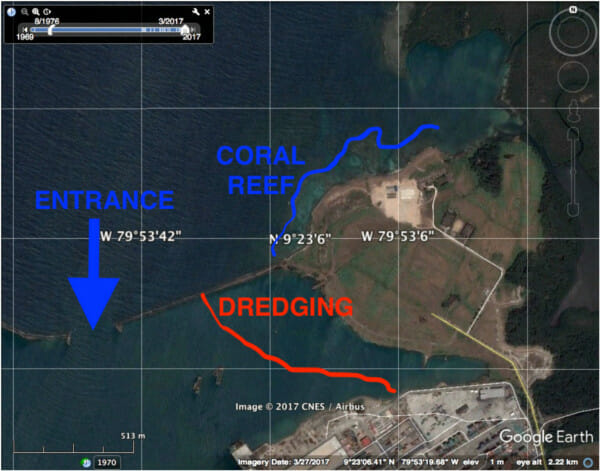 The port lies right next to healthy coral reef in front of Isla Margarita. The photos and video in this report were all taken inside the coral reef area shown in blue, just across the breakwater from the area that will filled in for the expanded port.

The full report, with photographic and video documentation can be seen below.

After the survey of Isla Margarita reef was done, the project proponents announced without warning that they had made a mistake: they needed 16 times more dredging material to complete the project than they had projected, and most of the required sand for the filling operations would be dredged in Nombre de Dios. Unfortunately, Nombre de Dios represents the center of the best shallow fringing coral reef flats in the entire Caribbean and is a site of global biodiversity importance. 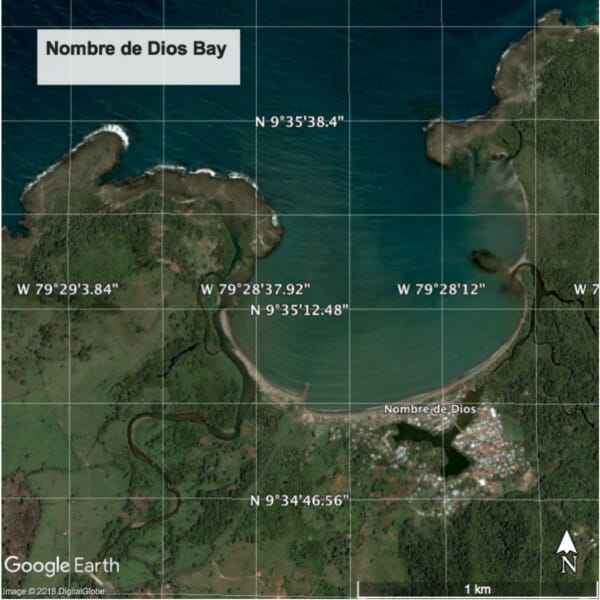