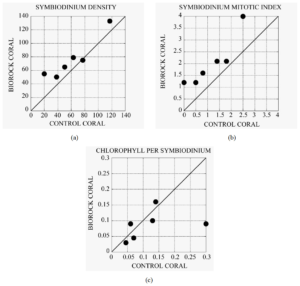 Figure 3. (a) Density of Symbiodinium sp. in corals grown on Biorock versus the genetically identical
mother colony from which they were transplanted in the same environment nearby. Electrically
stimulated corals had on an average 1.25 times higher symbiotic alga densities than controls; (b) Cell
division rate of Symbiodinium sp. as measured by mitotic indices (percentage of dividing alga cells) in
Biorock corals versus controls. Electrically stimulated corals have an average of 1.74 times higher
cell division rates, and presumably growth; (c) Chlorophyll content per Symbiodinium cell in Biorock
corals versus controls. Birock corals have an average of 0.69 times less chlorophyll per symbiotic alga
cell as controls. This suggests that their productivity is being suppressed, as happens in high light. Since coral calcification is normally proportional to photosynthesis of Symbiodinium sp. this implies that the higher growth rate of Biorock corals is not due to higher photosynthesis, but
due to greater energy availability provided by the electrical field.