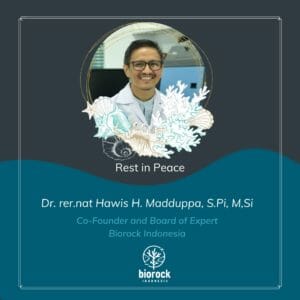 Biorock Indonesia and the Global Coral Reef Alliance announce with the greatest sadness the loss of Dr. Hawis Madduppa, leader of Biorock Indonesia’s research program for more than 20 years, and one of Indonesia’s most promising young marine scientists.

Hawis Madduppa took the Indonesian Biorock Training Workshop in 2001, while an undergraduate student at Bogor Agricultural University (IPB). Hawis was always smiling, just as his photograph shows, and full of penetrating questions. Hawis, and several other Bogor students, including Beginer Subhan and Ramadian Bachtiar, were so impressed with what they saw that they immediately decided to do their undergraduate theses on the effects of Biorock reef regeneration on the corals and fishes, building their own Biorock projects in the Pulau Seribu (Thousand Islands) archipelago just north of Jakarta. Their results, continued with their own students at Bogor, showed clearly enormous enhancement of fish populations in Biorock projects, and that adjacent structures of different shapes were dominated by completely different fish populations choosing habitat they prefer.

Hawis did his PhD at the University of Bremen, in Germany, and immediately returned to Indonesia to join the Marine Science and Technology faculty at IPB, inspiring new generations of students. Hawis quickly became one of Indonesia’s top experts in marine biodiversity, a crucial need in the country with the highest marine biodiversity in the world, with most of its species probably never described or classified. Hawis led efforts to discover the hidden diversity of species not even seen by scientists by studying the environmental DNA they leave in the water, using Oxford Nanopore DNA sequencers. His team quickly found much higher biodiversity than previously documented and many previously unknown species. His loss is a terrible blow to Indonesian marine science and his urgent research to identify species of the world’s richest marine ecosystems before they vanish.

Hawis and I were planning this year to apply eDNA methods to the measuring the complete biodiversity of the Biorock projects in Indonesia, which have increased biodiversity beyond what had previously been there. We plan to complete these studies at the first opportunity with his students in his memory.