Interview with Dr Tom Goreau on Lifestyles of Health and Sustainability

Translated from Lifestyles of Health and Sustainability, June 8 2020 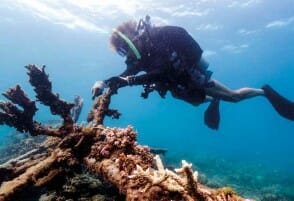 Questions:
1/ GCRA has been playing a role as global leader of coral reef protection for more than 30 years, could you share the change of people’s awareness and actions through this period? (Including the public, coastal communities, environmental organization and so on).

Coral reefs are the most economically valuable and productive ecosystems per unit area, as well as the most beautiful. For more than a hundred countries coral reefs are the major source of sea food, marine biodiversity, sand beaches, tourism, and shore protection. Almost all tropical beaches, and many islands, exist only because coral reefs produce sand and protects it from washing away. They are the most threatened and sensitive of all ecosystems to environmental deterioration because they need the cleanest waters.

Global warming and exotic new diseases, many linked to pollution, are now the major coral killers, but before they became severe, land-based nutrient pollution from sewage and fertilizers killed most corals along developed coastal shores. This can be completely prevented by simply cleaning up human waste inputs to the sea.

My grandfather took the first good underwater photos of coral reefs in Bikini Atoll in 1946, and my father was the first diving marine scientist. Since the 1940s we have shown the public photographs of healthy reefs and those being destroyed by dredging, nuclear bombs, soil erosion, sewage, fertilizer and chemical pollution, global warming, global sea level rise, overfishing, tourism, coastal development, new diseases, and other threats, to educate the public to protect corals. Our photos of reefs around the world in the 1940s, 1950s, and 1960s, and video of the changes since, are the focus of the forthcoming Canadian Broadcasting Corporation documentary film Coral Ghosts.

Despite the fact that we have constantly warned what was happening to coral reefs, these warnings were always ignored as an inconvenient nuisance to immediate profits. All coral-killing threats, especially global warming, have steadily gotten worse because humans value the money they make from destroying coral reefs more than the free ecosystem services, like fisheries, tourism, shore protection, sand supply, and biodiversity, that only healthy coral reefs can provide. We now have lost almost all the world’s coral reefs to greed. No wonder the fishes, beaches, and islands are vanishing!

2/ As we know, GCRA has around 600 boxes of slides taken by the pioneers of coral photography on reefs around the world and try to convert and post all of this on the web as permanent records of coral reef health. When will be available for the public to watch GCRA Coral Reef Image Archive according to your plan?

GCRA has preserved the largest collection of underwater photographs of coral reefs around the world from the 1940s, 1950s, and 1960s, from the personal collections of the photographers who pioneered the field. They show a world that had mostly disappeared before other people tried to photograph it. We are searching for funds to scan all the photographs, correct the colors for fading, and post them as a visual archive of a lost world that will never be seen again.

This year a major documentary film, Coral Ghosts, will be released by the Canadian Broadcasting Corporation on long term change in coral reefs around the world, based on these historical photographs. When the film is broadcast, we plan to arrange benefit showings to raise funds to make the entire collection available to the public on line. Unfortunately, the spread of the Covid 19 virus plague has delayed the film premiere, and we don’t know when or if we will be able to continue.

3/ Biorock™ technology by GCRA creates new paradigms for sustainable whole-ecosystem aquaculture, shall we know how many sites around world are using this therapeutic method till now? And is any group work for coral reef conservation around the world can apply the help of this technology from GCRA? Normally, what you will do to evaluate and reply the request?

GCRA’s Biorock technology is a revolutionary scientific breakthrough: not only does it create the only permanent growing marine structures that get stronger as they age and grow back if damaged. It also allows all marine ecosystems to be preserved when severely stressed and regenerated at record rates where there is no natural recovery. Biorock uses safe, very low electrical currents, which greatly increase settlement, growth, survival, and resistance to extreme stresses from temperature, mud, and pollution, of all marine life.

We developed the method first in Jamaican coral reefs, and at around 600 projects at islands in 44 countries all around the world. Biorock stimulates not only coral reefs, but all marine ecosystems, sea grasses, oysters, salt marshes, mangroves, fish and shellfish habitat, etc. Biorock allows us to keep coastal ecosystems alive when they would die, and grow them back at record rates even where severely damaged and unable to recover naturally.

Biorock grows limestone rock structures 2-3 times harder than concrete that survive severe typhoons and hurricanes. It produces the same rock that coral skeletons, reefs, and the pyramids are made of. We have built around 600 or more Biorock reefs in 44 countries around the world. This has been done essentially without funds except what our local partners could raise. Around 500 Biorock reefs are in Indonesia, where we work with Biorock Indonesia to expand projects with fishing community-managed protected areas to restore fisheries. But for every reef we regenerate, thousands are dying!

Half the beaches in the world will disappear by the end of this century at present rates of global sea level rise and of storm wave strength caused by global warming, it will happen even faster if climate change keeps accelerating and corals dying. Biorock technology grows back severely eroded beaches naturally at record rates, just months, by growing coral or oyster reefs in front. Biorock reefs replicate nature’s best shore protection, coral reefs, which absorb wave energy without causing erosion like concrete and rock walls do, and grow back if damaged. Biorock reefs cost a tiny fraction of concrete or rock walls, which will all fall down sooner or later, or dumping and pumping sand that will wash away.

Biorock technology not only grows back vanished beaches naturally and rapidly without dredging or pumping, it is also the most cost-effective way to regenerate all marine ecosystems (not only coral reefs), fisheries, coastal protection from waves, sand supplies, ecotourism, biodiversity, and provides new methods for mariculture of whole ecosystems, which produce their own food, in structures specifically designed for different species of fish and shellfish. Regenerating natural coastal protection by stimulating growth and biodiversity is essential not only for adaptation to global climate change but also for developing a sustainable Blue Economy from the oceans. Electricity is needed for Biorock, but the amounts are small and can be provided by renewable energy from the sun, wind, and seas.

Biorock technology is such a powerful tool for coastal management that every marine country would save fortunes using it instead of the conventional methods of coastal defense and management that have failed disastrously. Fishermen can become farmers growing back entire ecosystems full of life instead of killing the last wild fishes. Islands and whole countries can be protected from ocean flooding. We would like to see everyone use Biorock technology wherever it is the most cost-effective solution to their local coastal management problems, and we are ready to work with serious groups who have a site, permission, and funding, in order to train them to develop Biorock solutions to their local coastal management problems.

We work in partnership with local teams around the world, training them to use our technology. We first must assess the site carefully with them to design the most cost-effective Biorock solution. For large projects Biorock technology is available through Blue Regeneration SL, a Spanish company formed to develop power systems for large-scale Biorock shore protection and environmental regeneration projects (contact@blueregeneration.com). Non-profit organizations should contact the Global Coral Reef Alliance, the non-profit organization that developed Biorock electric marine ecosystem restoration technology, at (contact@globalcoral.org), or our local partner groups like Biorock Indonesia (http://www.biorock-indonesia.com).

4/ Facing the serious current situation of global warming which is one of the biggest threats to coral reef and marine ecosystem, what can most people do we can to protect them?

We and our colleagues at the Global Coral Reef Alliance (GCRA) invented the HotSpot method of predicting coral bleaching from satellite data more than 30 years ago, and first showed the world had passed the tipping point for coral reef bleaching from global warming in the 1980s. The world has refused to act to reduce CO2 to prevent coral reefs going extinct from heat stroke.

Global warming and new diseases are now killing the last healthy coral reefs, and there is very little time left to save what is left. Because Biorock greatly increases the settlement, growth, survival, and resistance to severe environmental stresses including extreme high temperature, we have saved corals on Biorock reefs when corals around them bleached and died. Biorock is the only method that protects corals dying from high temperature. But in the long run all will be lost when we eventually pass the limits of even these corals to severe high temperatures and pollution, unless we clean up oceans and atmospheres by eliminating greenhouse gases and pollutant chemicals.

Because coral reefs are the most sensitive ecosystem to environmental stress, saving them will save all other ecosystems too. Global action regenerating all ecosystems, to increase natural CO2 sinks in order, and reverse global warming and global sea level rise, is critically needed to stabilize CO2 and climate at safe levels. Biorock, by regenerating sea grasses, salt marshes, and mangroves, can store large amounts of carbon in marine soils, and help reverse climate change with the largest benefits at the lowest costs.

Biorock grows faster than global sea level rise (now 3-4 millimeters per year), so it protects coastlines from flooding. Biorock can be used to grow coastal structures, reefs, or islands of any size or shape that can evolve to meet shore protection needs. They can grow reefs in front of growing beaches, or that attach themselves to the bottom and become anchor points for mooring floating cities, which could be built for people who now live in the many port cities that will soon be underwater. Floating Biorock coral reefs can dissipate wave energy offshore to protect floating cities, while also producing large amounts of food from fish and shellfish. We are working with Oceanix to develop floating cities for adaptation to sea level rise when the need to abandon flooding coasts can no longer be avoided.

Even though Biorock regenerates entire marine ecosystems, which are collapsing everywhere, there is very little time left, and no funding, while reef destruction races ahead. There will be no future Blue Economy unless we regenerate our crippled coastal ecosystems now, or we will lose our shorelines soon.

The tools are now available to regenerate all ecosystems, but we just aren’t using them on the large scale that is needed! Future human health depends on environmental health, so BioGeoTherapy, regenerating our planet’s natural life support systems, will be even more urgent after this virus is finally over if humans are to survive.

Thomas J.F Goreau, a biogeochemist, was educated in Jamaican schools and holds degrees from MIT, Caltech, and Harvard. President and founder of The Global Coral Reef Alliance, he has dived on coral reefs across the Caribbean, Paciﬁc, Indian Ocean, and South-East Asia for more than 60 years. He has published more than 150 papers and written and edited books on scientiﬁc photography, marine ecosystem restoration, soil fertility restoration and climate stabilization. He is co-inventor of the HotSpot method for predicting coral bleaching from satellite data and of the Biorock method for regenerating marine ecosystems and eroding coastlines.