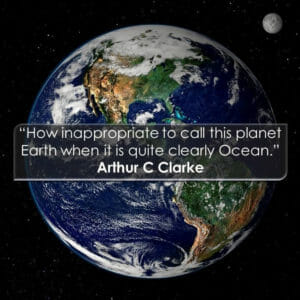 When I met Arthur in 1997, in his wheelchair in his study in Colombo, Sri Lanka, his diving days were reluctantly over. Arthur told me that he had seen so many exquisitely beautiful coral reefs totally destroyed that even before he was crippled by polio, he could no longer stand to dive on the wrecked reefs he had written so many books about.

His eyes went wide when I showed him photographs of corals and fishes on our Biorock electric reefs in Jamaica, Panama, Seychelles, and Maldives. He quickly grasped the scientific principles when I explained how it worked and immediately saw that this was a revolutionary technology that seemed impossible or magical to those who did not understand the possibilities. After years of despair that coral reefs were a lost cause, he told me now for the first time he had hope again after seeing our results and fully understanding Biorock’s potential to regenerate vanishing ecosystems on a large scale. 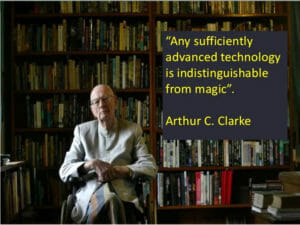 Arthur knew better than anyone how hard it was to get people to think in new ways and apply novel technologies that seemed like science fiction or impossible magic. He immediately wrote a series of letters to the Sri Lanka Prime Minister and top environmental officials urging them to support rapid development of Biorock reefs, in order to regenerate not just the corals, but the fisheries, beaches, and the very coastlines collapsing into the sea after the reefs that had built them were destroyed. Sadly, his 1997 sense of desperate urgency about saving Sri Lanka’s coral reefs was never answered, and to this day there are still no Biorock projects to protect Sri Lanka’s damaged and polluted beaches, coral reefs, and fisheries.

To my surprise, Arthur then told me an unexpected personal story. His classic 1956 book, Coast of Coral, the first book about Scuba diving in English, describes his adventures seeking shipwrecked treasure on the Great Barrier Reef. Previous treasure hunters used heavy pearl diver helmets with hoses and pumps on boats and had very limited movement. He told me that in 1950, when he and his buddy were setting up their Scuba tanks on the beach, about to enter for what they were certain was the first free diving ever on the Great Barrier Reef, they were shocked to find out they were not the first. Now those corals are largely gone.

Just before they could get into the water, suddenly to their amazement out of the sea in front of them walked out a man with a mask, carrying a heavy home-made underwater camera. Arthur told me it was my grandfather Fritz Goreau (Goro), the LIFE Magazine Science photographer and inventor of close-up macro photography. Mutually astonished to find they were no longer the only free divers on the Great Barrier Reef, they briefly said hello, my grandfather rushed off to the darkroom to see his developed images, Arthur eager to finally dive on the Great Barrier Reef for his first time. At least that is the story that Arthur told me from his wheelchair in his study, but he must have confused my grandfather with someone else, because my grandfather’s photos of GBR underwater were published in LIFE Magazine in 1950, 5 years before Arthur arrived in Australia.

Arthur C. Clarke was a far-sighted visionary of transformative inventions at the cutting edge of science and technology. He knew any new technique could be used for good or for evil depending on the intention of those who control it, the theme of much of his tireless science writing, television documentaries, and science fiction.  He found his personal paradise in coral reefs and longed to save them from the overwhelming, seemingly irreversible, damage he saw human technologies inflicting on them. Biorock electric reef ecosystem regeneration technology was the only hope he ever found, and he badly wanted to see it applied to regenerate the reefs he had loved around Sri Lanka and across our only Planet Ocean, before human misuse of technology turns it uninhabitable.