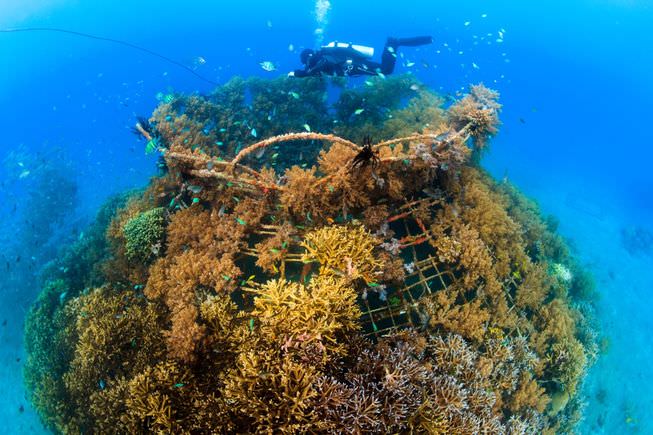 You may have heard that coral reefs are in trouble. Serious trouble. A recent survey of Australia’s Great Barrier Reef, the largest living structure on the planet, found 93 percent of the coral has been impacted by bleaching; a stark warning sign that the ecosystem is under tremendous environmental stresses.

The potential underwater losses are so great, encompassing an area of the size of Scotland, that one leading coral researcher is already calling it the country’s “biggest ever environmental disaster.”

With the clock ticking, the race is on to find innovative ways to counter the mass deaths of coral reefs worldwide. The most obvious solution is to stop dumping carbon dioxide into the atmosphere to avoid a future of hotter, more acidic oceans. Scientists are also targeting so-called “super corals” in an effort to mass produce species more resistant to climate change. The third involves rebuilding coral reefs using steel frames and, most surprising, a steady current of electricity.

Called “Biorocks,” these steel-framed structures can sometimes appear to be more akin to an underwater art project than a coral incubator. The steel can take on any shape, but the most important piece of the puzzle is the low-voltage electricity coursing through the frame. The idea, patented in 1979, is the brainchild of marine scientist Wolf Hilbertz and marine biologist Thomas J. Goreau. Together, the pair discovered that an electric current passed through sea water creates a chemical reaction that results in a coating of limestone minerals similar in composition to the natural ones created by young coral.

“These currents are safe to humans and all marine organisms,” explains the Gili Eco Trust, a non-profit that has setup over 100 Biorock structures around islands in Indonesia. “There is no limit in principle to the size or shape of Biorock structures, they could be grown hundreds of miles long if funding allowed. The limestone is the best substrate for hard coral.”

The video below shows how a Biorock structure is made and installed on a coral reef.

Once a Biorock structure is submerged, organizers transplant broken fragments of live coral (often ripped from reefs by strong waves, anchors or other forces) and attach them to the frame. Electricity is provided by either an underwater cable from shore or from floating solar panels. Reef-building groups are also starting to experiment with wave-generation to power the frames. Once turned on, it only takes a matter of days before the structure is covered in a thin layer of limestone. Within months, the coral has taken hold and begins to flourish.

“No one believes what we do is possible until they see it themselves,” co-inventor Thomas Goreau told Gaia Discovery. “Growing bright coral reefs swarming with fish in a few years in places that were barren deserts is something everybody thinks can’t be done, but has been done in nearly 30 countries with only small donations, mostly from local people who remember how their reef used to be and realize they must grow more corals now.”

In the video below, one such local in Bali takes us on a dive and explains how he nurtures coral growth around a Biorock.

According to the Global Coral Reef Alliance, a non-profit of which Goreau is the president, Biorock reefs not only help speed the growth of coral, but also make them more resistant to stress-inducing temperature and acidity increases.

So why hasn’t more of the marine science community shifted to rebuilding coral reefs using the Biorock method? The first reason has to do with feasibility, since it’s not always easy to run a low-voltage cable from shore to the reef. Thanks to the rise of solar and tidal energy solutions, this obstacle has become less of a problem. The second, according to one marine scientist, has to do with an absence of published studies showing the process is actually worth pursuing.

“It certainly does appear to work,” Tom Moore, a coral restoration coordinator at the the National Oceanic and Atmosphere Administration, told Smithsonian Magazine. He added that the scientific community has been slow to embrace over the lack of independent validation. That said, and with coral reefs around the world facing worse odds as the years tick by, Moore says he’ll like give the process a try.

“We’re actively looking for new techniques,” he added. “I want to keep a very much open mind.”