This one minute video made early in 2021 by Delphine Robbe of the Gili Eco Trust shows a Biorock reef around 17 years old which survived two severe bleaching events undamaged. The staghorn coral growing all over it is one of the most vulnerable species to coral bleaching, colonies of this species further away that were not protected by the Biorock electrical field all died.

The Biorock method is the only method known to protect corals from bleaching mortality. Exceptional tolerance to extreme high temperatures results from higher biochemical energy levels caused by mild Biorock electrical stimulation. Biorock keeps coral reefs alive when they would die from heat stroke, allows oyster growth throughout cold winters, seagrass to grow on bare rock, salt marshes, to grow where they would wash away. Biorock produces reefs full of fishes, lobsters, oysters that grow back severely eroded beaches in months. Biorock works when all other methods fail.

Global warming passed the coral bleaching tipping point in the 1980s and combined with increasing pollution and new diseases few corals will survive coming decades unless we use methods proven to greatly increase settlement, growth, survival, and resistance of corals and all marine organisms to severe environmental stress from severe high temperature, mud, pollution and wave energy events. 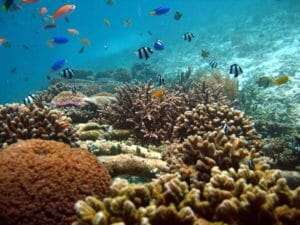