In the 1950s Jamaica was surrounded by some of the finest coral reefs in the Caribbean, which were the first in the world to be studied by diving (Goreau & Goreau, 1959). These were almost all destroyed by eutrophication caused by untreated sewage, hurricanes, and dredging (Goreau, 1992) and have continued to deteriorate, causing a bottom up collapse of the fisheries due to lack of shelter and food, quite independently of top-down collapse caused by overharvesting.

Marine protected areas where the corals are dead and dying will not restore fisheries, so active restoration of the habitat to provide the fish with shelter and food is needed for the fish populations to recover.

New technologies to rapidly restore coral reefs were invented in Jamaica in 1987, but have been abandoned in Jamaica for 25 years due to lack of support and funding from both Jamaican and foreign institutions.

This tiny pilot project aims to show how community-managed groups can restore their coral reef and fisheries around Jamaica.

The project was set up in May, 2017. This report shows the first photographs of the new coral growth, taken in June 2017, after one month.

This area used to be a solid forest of elhorn coral reaching the surface, that you could not swim over (see photograph below of a typical Jamaican reef around 60 years ago). That forest of coral was smashed into dead rubble by hurricanes and has never recovered. While a few small corals have managed to settle, the reef has lost its structure, its biodiversity, and its ability to provide fish with shelter and food. Worse, the limestone bedrock below is being systematically excavated and eroded by dense populations of sea urchins. The very small Westender pilot project aims to turn a collapsed vanishing reef back into a lush growing one, full of fish.

Since there are so few elkhorn corals left, and since we use only naturally broken fragments found on the bottom, most of which are in poor condition, we could only find a handful of them to transplant onto the new Biorock reef. Most of these pieces were very small, but all are growing well.

The photos below show that all have recovered from the physical damage they had previously suffered and all are growing rapidly. Already new branches are forming, and the small white spots are new coral polyps showing extremely rapid coral growth. The corals can be seen to be already overgrowing and attaching themselves to the structure.

The small corals that have previously settled on the dead reef rock will grow faster, and so will the “good” algae, the calcareous branching algae that are the source of the beach sand. Greatly increased settlement of new corals will also become obvious in the coming year.

In May the steel framework attached over the dead reef rock was red and rusting. In June it has been completely covered by growing limestone rock. The spacing of the mesh, 6 inches or 15 centimeters, provides a scale. Fish immediately began to move in to the project site.

Photographs by Dan Brewer, except for the first, which was taken around 60 years ago by the late Prof. Thomas F. Goreau, founder of Jamaican coral reef science. 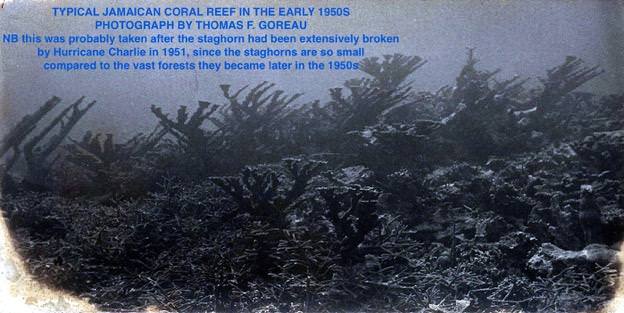 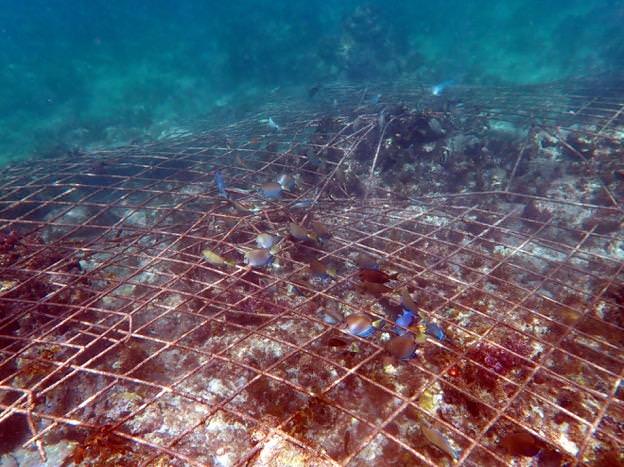 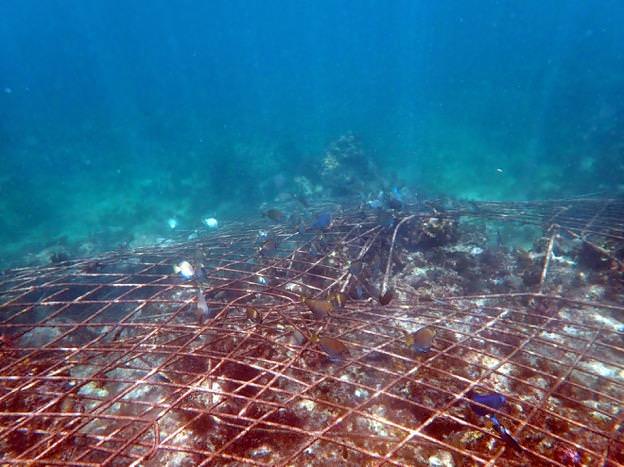 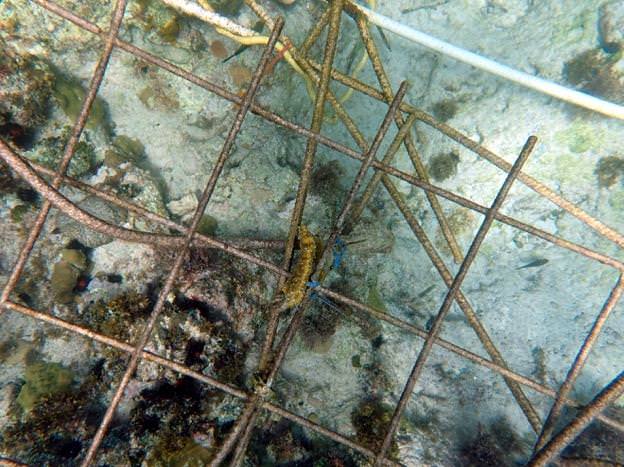 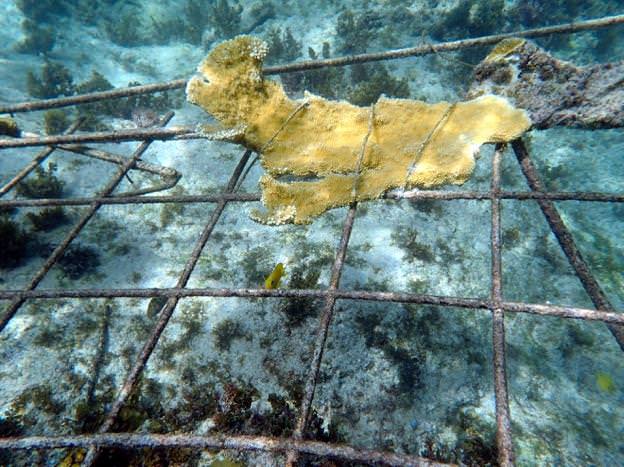 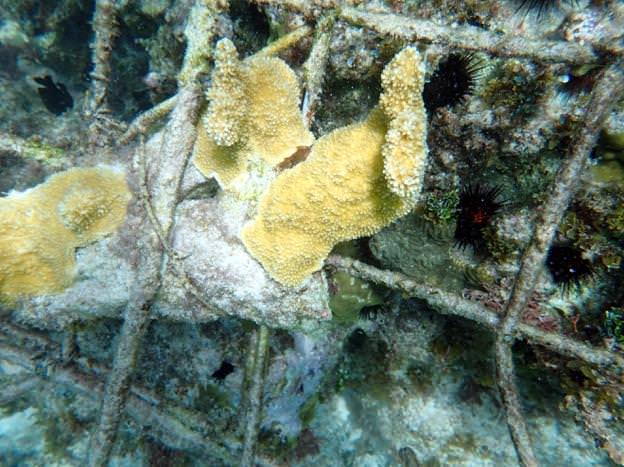 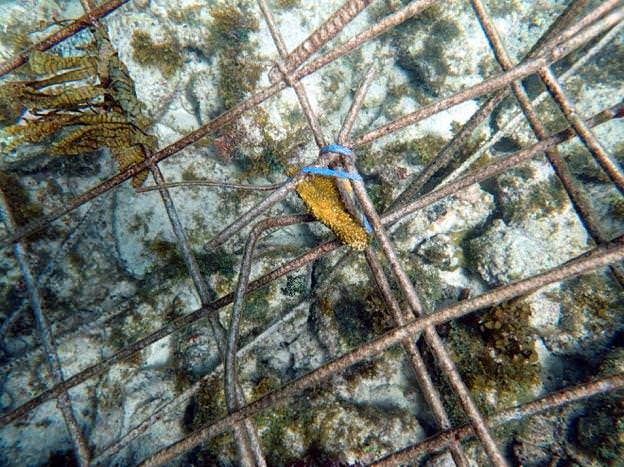 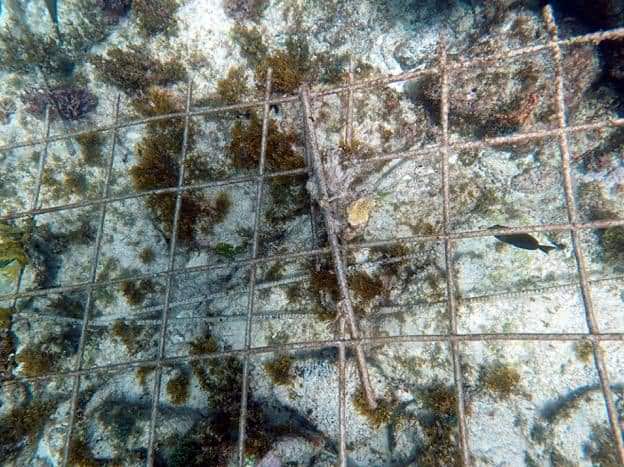 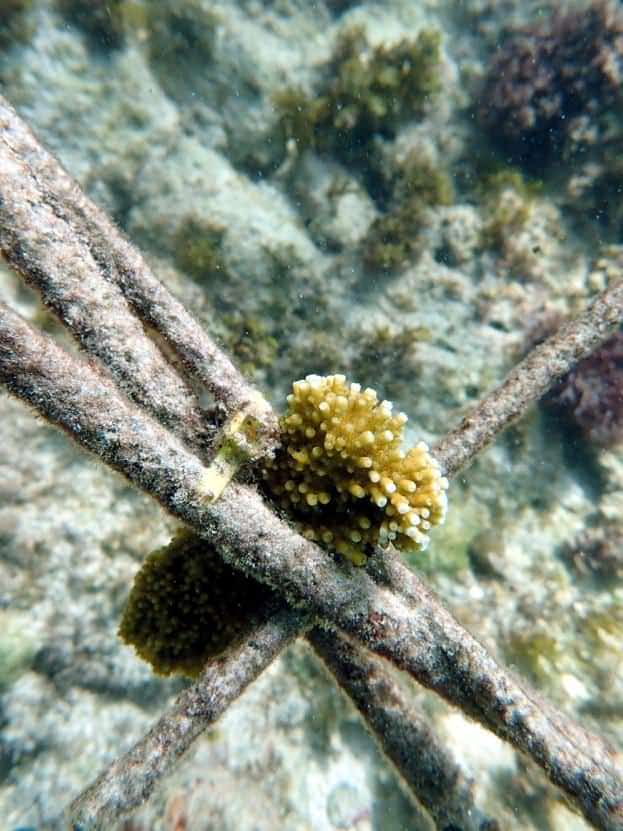 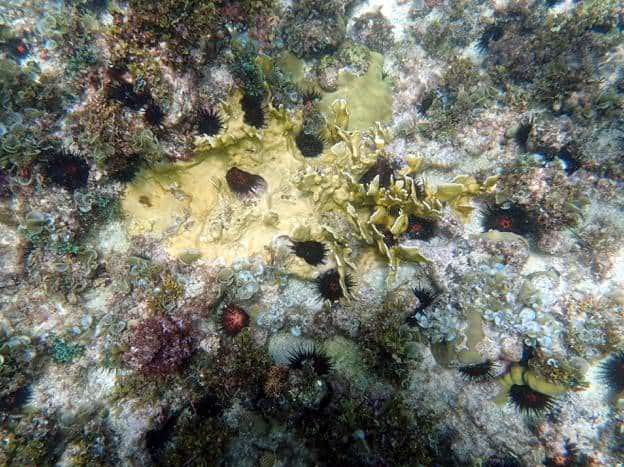