Throughout 2019 GCRA continued to work with grassroots local marine environmental protection and sustainable management groups all around the world to maintain existing Biorock electric reef marine ecosystem regeneration projects, and plan new ones. Some of our major activities in 2019 included the following:

Filming of the full-length documentary film, Coral Ghosts, directed and produced by Andrew Nisker, continued through the year with major filming sessions in Jamaica and the Marshall Islands following through on last year’s filming in Indonesia, the Great Barrier Reef, and the Canadian Arctic.

The film, now undergoing final edits, will premiere in Toronto early next year, and be broadcast on the Canadian Broadcasting Corporation. This will be the first documentary film to show long term changes in coral reefs around the world since the first underwater photographs, the causes for their current catastrophic decline, and how to regenerate them for the future.

GCRA will be delighted to arrange showings of Coral Ghosts for public education and to support fund-raising efforts with our many partner environmental groups world-wide. The short promotional trailer, which covers only a small part of the content of the documentary film, is shown below:

Bikini Atoll was where GCRA’s work on coral reefs first started in 1946. Fritz Goreau, the world’s top scientific photographer, documenting medical and biological impacts of the US nuclear bomb tests, built underwater cameras to take the first high quality underwater color photographs of coral reefs, and began photographing the coral reef to document its ecology and the physical processes affecting them, in particular adaptation to wave forces.

GCRA President Thomas J. F. Goreau, their grandson and son, did a lot of work on restoring coral reefs in the Marshall Islands, but never had the chance to get to Bikini Atoll because of its remoteness and the expense of getting there. Filming changes since the old photographs for the Coral Ghosts film finally provided an opportunity to get there and to work with the Bikini exile community. 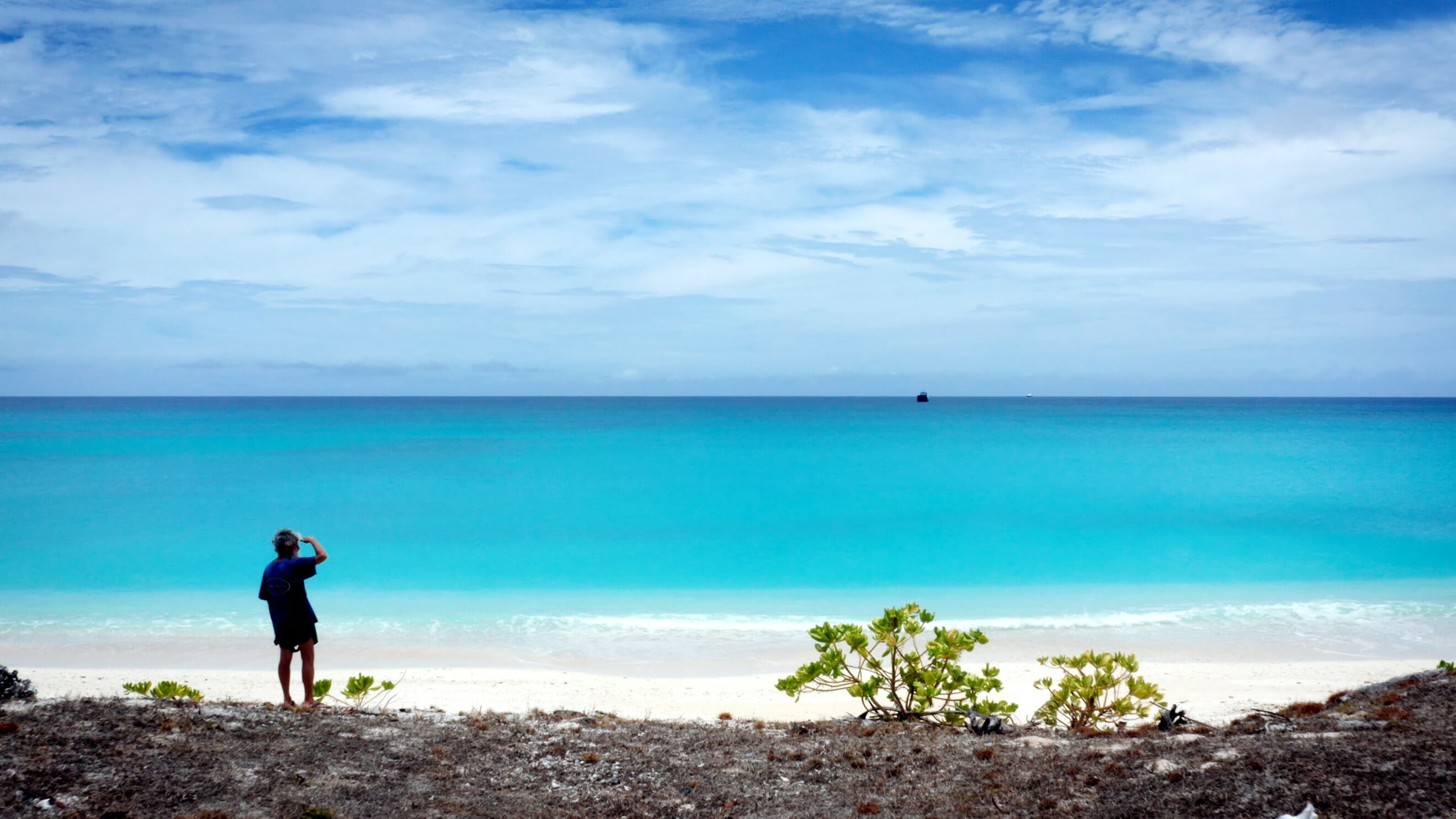 Tom Goreau on Bikini Island. The black dot on the horizon is a supply ship, the tiny white dot on the horizon to its right is a luxury live-aboard dive boat right over the ships sunk by the first nuclear bomb test which his grandfather photographed and whose radioactivity killed his father.

Tom Goreau showed the Bikini community for the first time the photographs his grandfather took of their home island in 1946. He assessed coral reef conditions on Kili, Ejit, and Bikini Islands and immediately found that most of the corals had died from severe high temperature coral bleaching in 2014. He assessed the environmental destruction of Bikini from exotic invasive species introduced by the US military, which has wiped out the native vegetation and some of the world’s richest seabird nesting sites. He started a small Biorock pilot shore protection project to protect the Ejit school from damage by wave erosion and flooding. 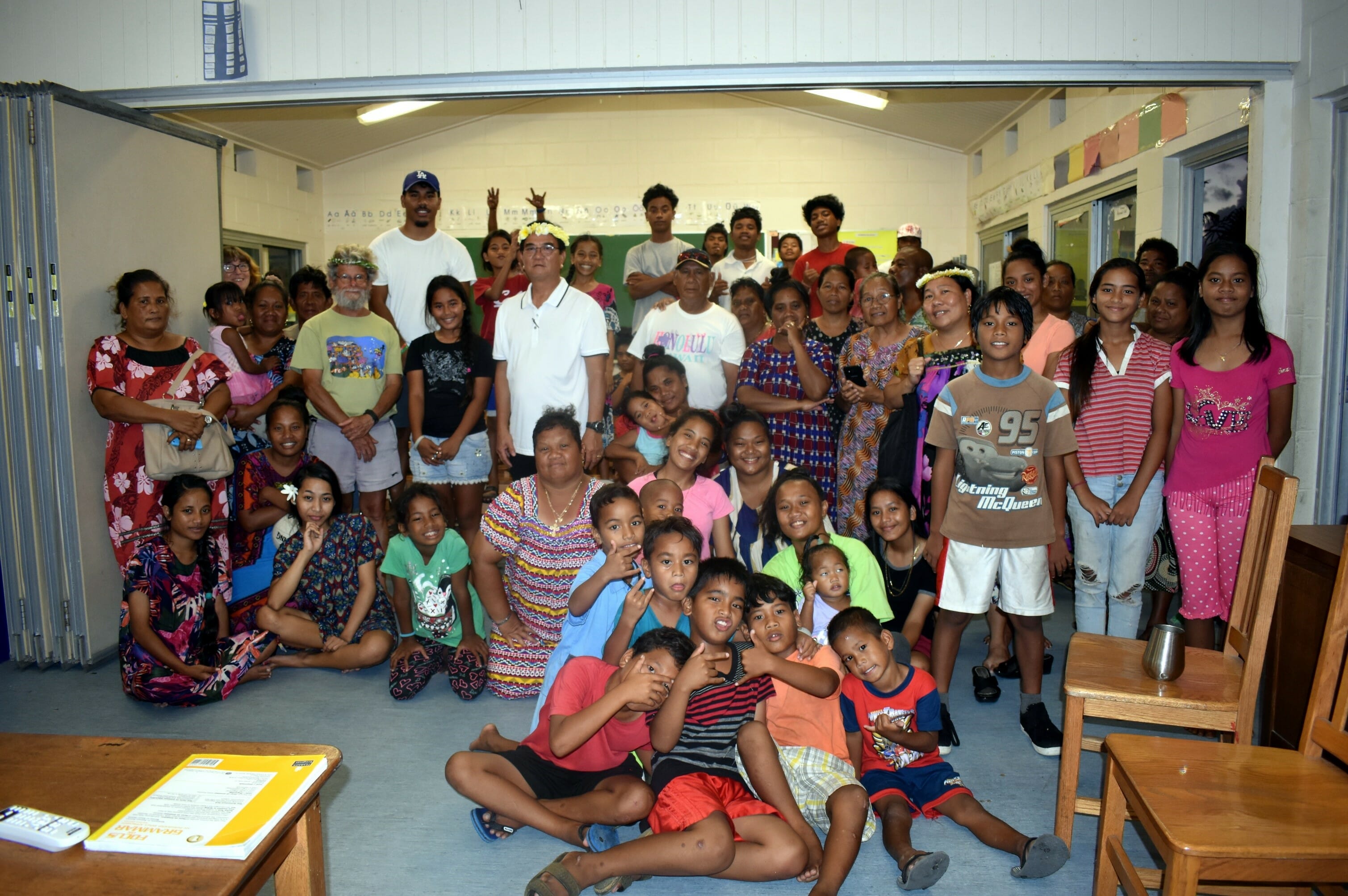 Tom Goreau with the Bikini children at their school in Ejit, after showing them photographs of their ancestral island in 1946.

Indonesia is a major focus for GCRA because it has the world’s largest areas of coral reefs, mangroves, and sea grasses, and the highest biodiversity of these ecosystems in the world. All these ecosystems have been severely damaged by unsustainable development and their ecosystem services destroyed or damaged.

There are around 500 Biorock reefs in Indonesia, in Bali, Lombok, Sulawesi, Ambon, Java, Flores, and Sumbawa. These reefs, built and maintained by Biorock Indonesia, GCRA’s local partner organization, continue to show spectacular coral growth and constant increases in fish populations and biodiversity. Many more projects are in planning stages, working with local communities, environmental management groups, the Indonesian Ministry of Marine Affairs and Fisheries, and the private sector.

Biorock beach regeneration projects in Indonesia and the Maldives have grown back severely eroded beaches at record rates naturally by growing small Biorock reefs in front of them. The Biorock reefs have regenerated corals, seagrasses, fishes, and invertebrates, as well as providing new sand supplies for beaches while protecting them from storm waves. In 2019 a second new beach was grown back on an eroding site at Pulau Gangga, Sulawesi, building up sand height by more than a meter, protecting a sea wall that had previously been undermined by sand erosion and about to fall down, and reburying roots of trees that had been exposed and about to fall down because the sand underneath had washed away. A beach about a hundred meters long in Bali has grown upward by about a meter in height, and expanded in width by about 20 meters. The large amount of new white limestone sand produced by the Biorock reefs is changing the color of the beach, which had originally been black volcanic sand.

Biorock Indonesia continues to win major national and international environmental awards and publicity in the Indonesian media, and to work with Indonesian Government and international agencies to push for large scale regeneration of marine ecosystems and fisheries under local management across Indonesia’s 17,000 islands.

The GCRA/Biorock Indonesia team is collaborating with Arsari Enviro Industri, Indonesia’s leading group regenerating severely degraded lands damaged by deforestation for plywood and oil palm plantations. During 2019 we planned new projects to use Biorock methods to regenerate mangroves illegally cleared for shrimp ponds to turn them into orangutan sanctuaries, production of renewable bio-fuels, and design a research laboratory to quantify the carbon sequestration that will result. It is anticipated that these new methods could make Indonesia the world’s largest and most cost-effective carbon sink for reversing global climate change. The projects should start in early 2020.

You can see more about Biorock Indonesia at http://www.biorock-indonesia.com. 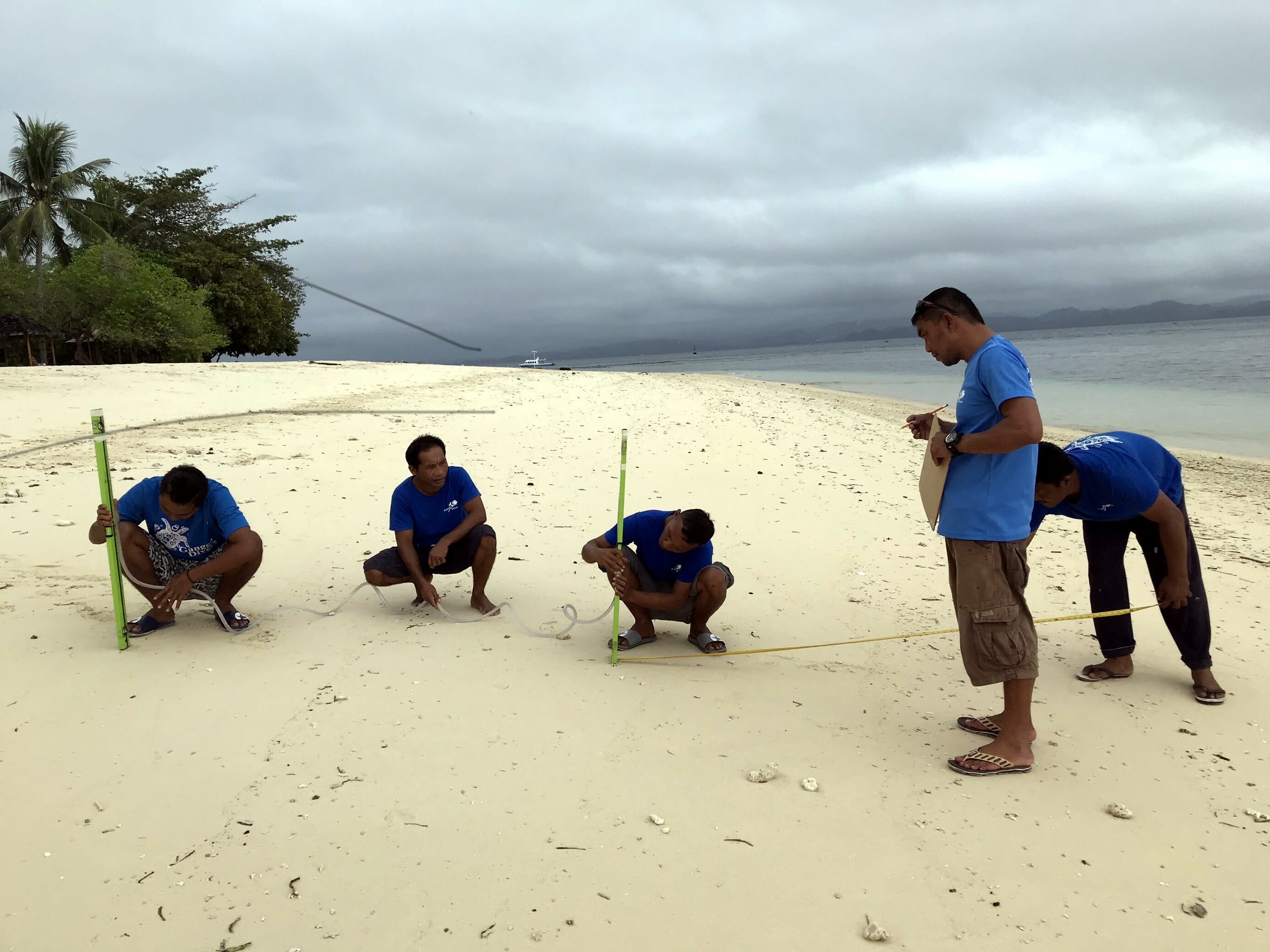 Measuring growth of one of the new beaches grown with Biorock reefs.

GCRA, working with the Coral Ghosts film crew, filmed coral reefs in Jamaica that were the first in the world to be studied and systematically photographed by the world’s first diving marine scientist, Dr. Thomas F. Goreau, throughout the 1950s and 1960s. Dr. Thomas J. F. Goreau and Dr. Peter D. E. Goreau re-visited many of these sites, some of which they had not seen in 65 years, others that they have dived on hundreds of times over this period, to compare the changes in the reef. Almost all the corals and fishes are now gone, and the largely dead reefs are now overgrown by weedy algae caused by untreated sewage. Long-term changes in the corals and algae were examined and will be discussed in future reports.

Surprisingly, Dr. Tom Goreau found almost all the corals whose growth rates he had measured in the 1980s were still alive. Some of these corals were there when Columbus came to Discovery Bay, and it was astonishing to find them still alive when almost the entire reef around them has vanished! He gave a public community lecture at the Discovery Bay Fishermen’s Cooperative showing how two thirds of the beach has vanished since the old photographs, and how introduction of captive dolphin facilities in the Discovery Bay Marine Protected Area would foul the water with bacteria and harmful algae blooms that would reverse the progress that had been made in improving water quality by sewage treatment. 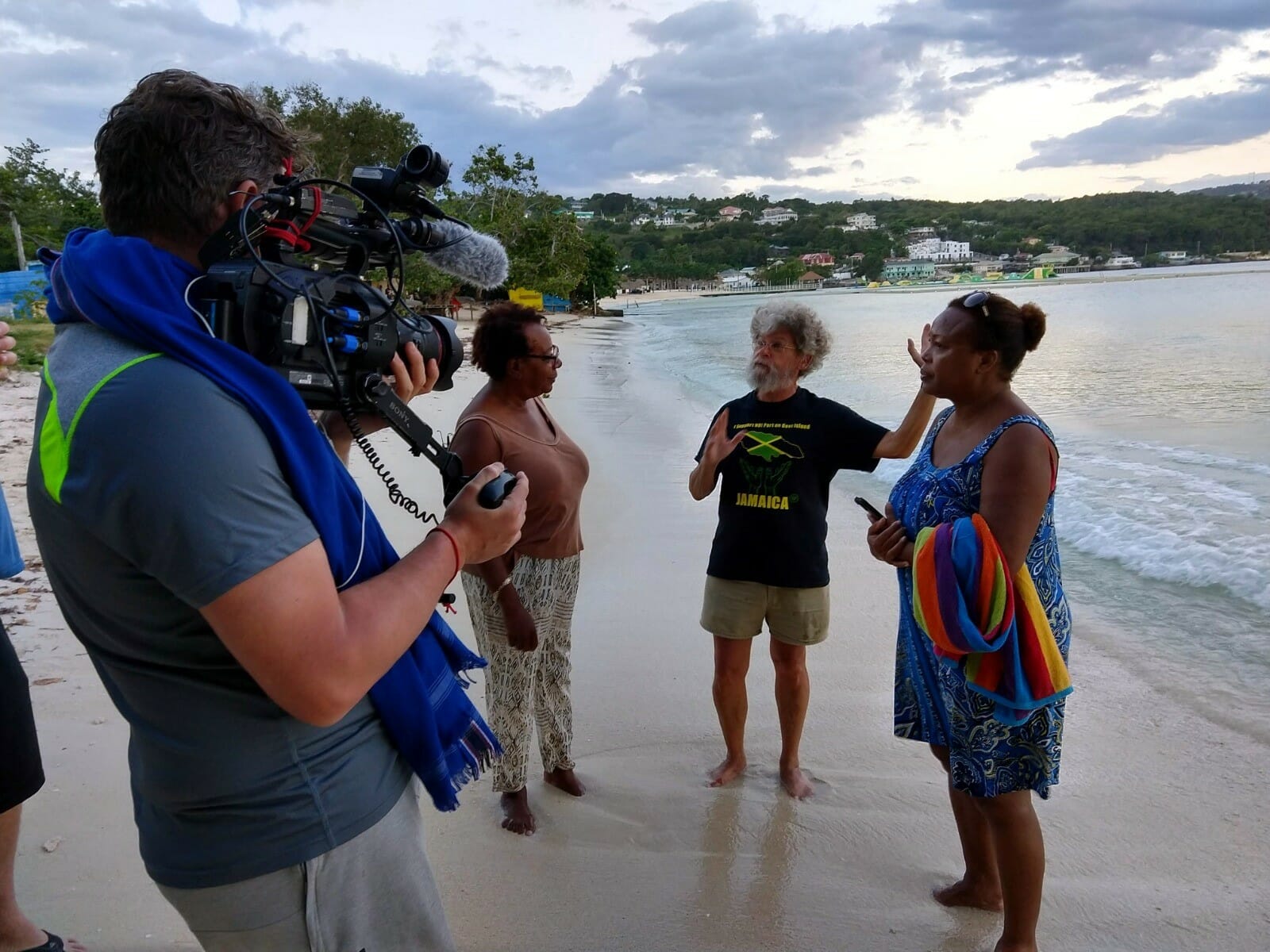 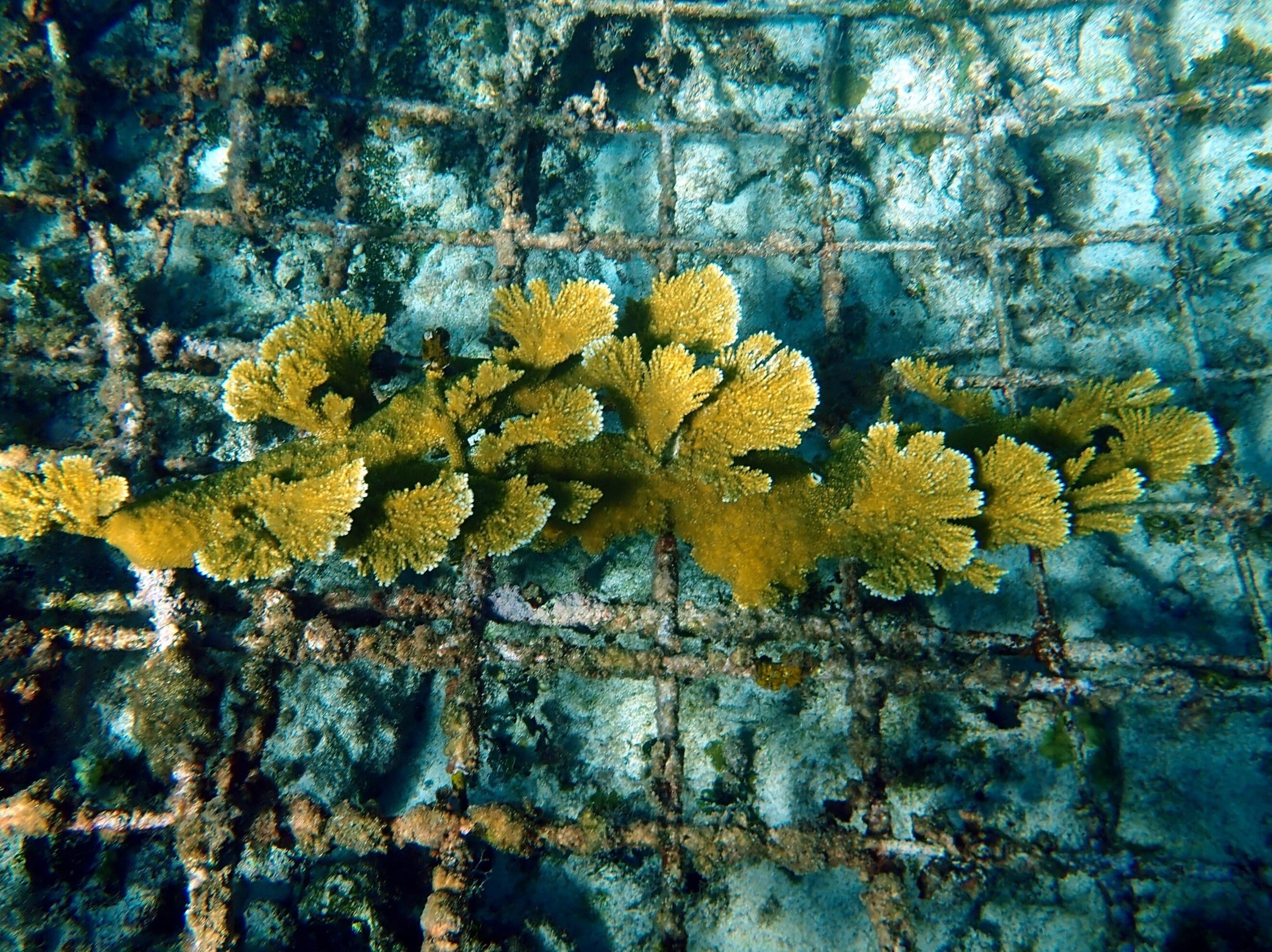 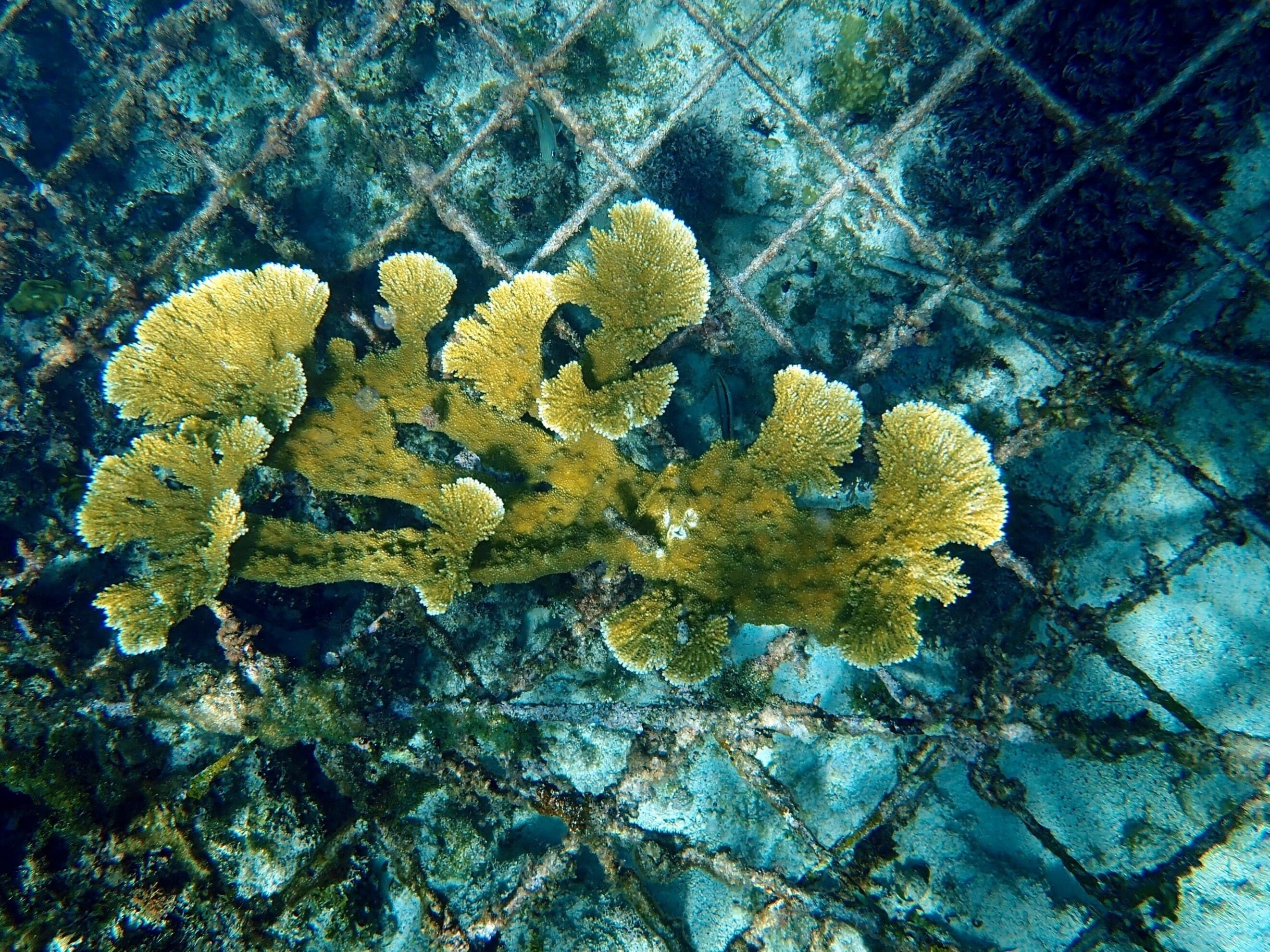 Biorock coral restoration projects in Cozumel, on the Caribbean side, had power boosted in order to grow faster despite severe pollution and diseases killing corals in nearby reefs. Sites in Sonora, on the Pacific side, were evaluated for future Biorock sustainable mariculture, energy, water, and materials production projects with the Comca’ac indigenous people in the Sea of Cortes.

GCRA established a collaboration with the Barbados Blue Green Initiative, and meetings were held with Government Agencies to apply for permits for new coral reef restoration and shore protection projects on severely eroding shores. These projects are expected start in early 2020. Biorock projects continued in other parts of the Caribbean including Panama, St. Barthelemy, and Grenada, with new projects under development. The St. Barthelemy projects survived the impact of Category 5 Hurricane Irma without damage.

Spain has the most beach tourists in the world, but most beaches are washing away. GCRA was invited to develop new large shore protection projects to regenerate badly eroded beaches and dying seagrass beds. Presentations were made in Playa de Granada, on the Mediterranean coast of southern Andalusia, and in Madrid. Collaboration with Spanish high technology engineers and entrepreneurs was established to develop improved power systems for large scale application of Biorock technology for beach, marine ecosystem regeneration, and sustainable mariculture.

A formal agreement was signed at the United Nations for GCRA to advise the Blue Guardians Program of SIDS DOCK, an Inter-Governmental Organization assisting the Association of Small Island States develop programs for adaptation to climate change and developing sustainable energy resources in Small Island Developing States. 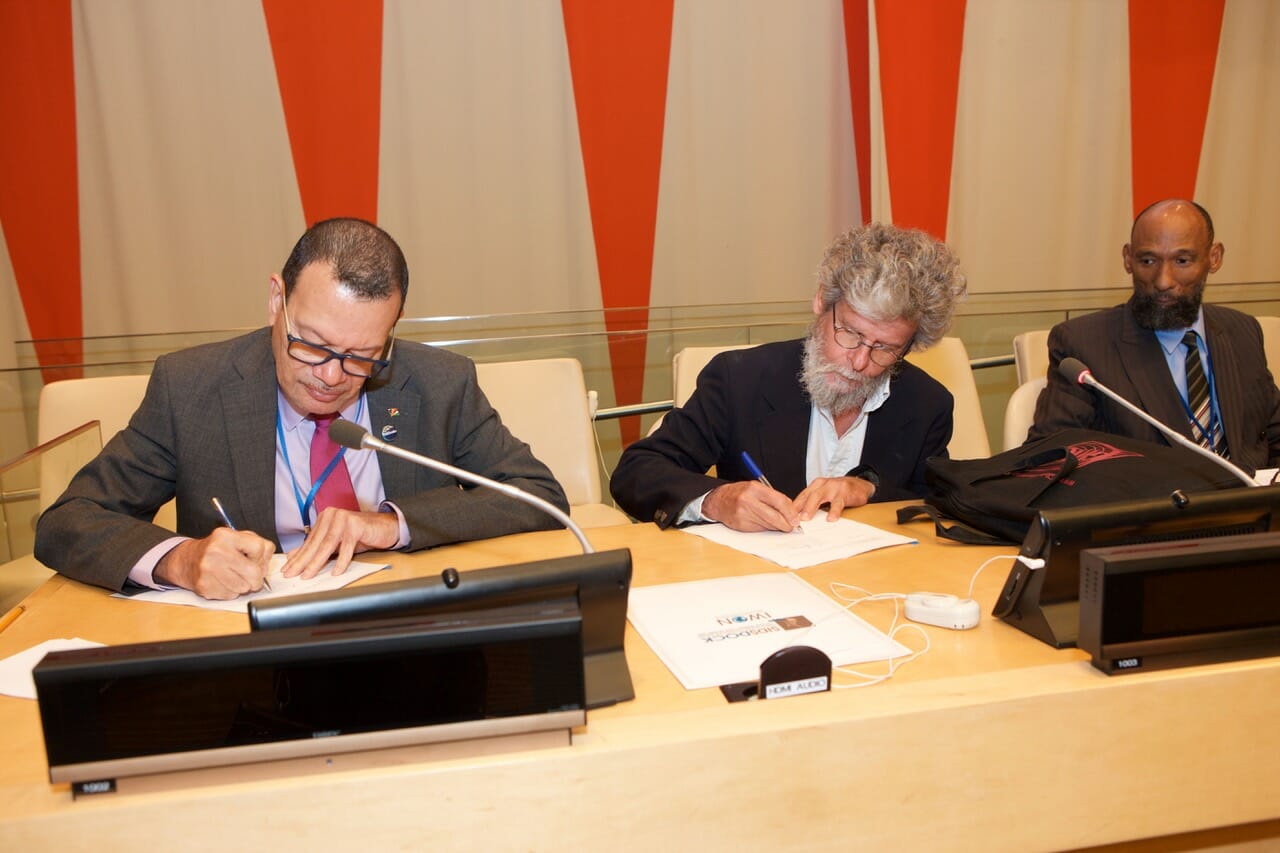 Tom Goreau (center) at the UN signing. At left is Seychelles Ambassador Ronald Jumeau, and at right is Dr. Al Binger, Executive Director of SIDS DOCK.