Any development at Palmetto Point would cause significant, and probably irreversible, deterioration of water quality in Codrington Lagoon, Barbuda’s major fish nursery ground.

Codrington Lagoon is one of the largest and most important lagoons in the entire Caribbean for fisheries habitat, a Ramsar site of global importance for migratory birds, the largest Frigate bird nesting site in the Americas, and fully deserving of UNESCO World Heritage Site status. The entire watershed draining into Codrington Lagoon must be kept free of pollution for the Lagoon to maintain health.

Since Barbuda is too dry to grow much food, the island lives off its fisheries, both for food and for most of its income, by selling lobsters to Antigua, St. Martin, and other islands. Barbuda has some of the most productive fisheries in the Caribbean. This is due in part to the large shallow banks dotted with coral reefs and seagrass beds that surround the island on the west and south, which provide habitat for mature lobsters, conch, and reef fish. But the crucial factor in Barbuda’s fisheries production is the unexcelled nursery grounds for juvenile lobster, conch, and fish in Codrington Lagoon. Juveniles migrate out from the Lagoon and populate the reefs and seagrass beds when they become adults. Their health depends on the water quality of the lagoon, in particular maintaining the current levels of temperature, salinity, dissolved oxygen, turbidity, and most especially, low concentrations of dissolved nitrogen and phosphorus nutrients.

Because most of the Codrington Lagoon watershed is very flat and low lying, and surrounded by mangroves, there is very little groundwater flow into the Lagoon. In fact, evaporation at low lying spots in the island is causing saline water intrusion from seawater, as would over-pumping of Barbuda’s scarce fresh groundwater resources. This is very fortunate for the ecological health of the lagoon, because it means that groundwater under Codrington Town that is contaminated with septic tank effluents does not flow into the Lagoon. If it did, there would be masses of weedy algae smothering the dock area.

The highest point in the Codrington Lagoon Watershed used to be the high sand dunes at Palmetto Point, now largely gone, which were formerly the major hydrological source of fresh water to Codrington Lagoon. With removal of the highest dunes down to the water table, the elevated ground water aquifer underneath the sand, a vital resource for the island, which used to flow into the lagoon at the southern edge, has been greatly reduced. This zone of lagoon freshwater recharge is exactly where the developers propose to build a mega-yacht marina, which would require dredging deep channels through the lagoon and the barrier beach all the way to deeper sea floor.

These high sand dunes are the youngest geological feature on the island, having been formed by extreme hurricane waves within the last 8,000 years since sea level reached its present level (see figures below). This has historically been the most dynamic and rapidly changing part of Barbuda’s coastline. Strong erosion episodically has eaten away at the northwest shore during severe hurricanes and northers, with sand being deposited in the south east. These patterns are clearly shown in global satellite maps of coastline change which can be seen in the figures below.

The proposed development in the most crucial area of Codrington Lagoon would irreparably alter the Lagoon’s ecology for the worse. Any increase in turbidity that would result from sediments suspended by dredging of channels, or from soil erosion from deforested areas in the watershed, will kill corals and seagrasses in the Lagoon, by blocking their light. Any increase of nutrient inputs into the lagoon from golf course fertilizers or sewage plant discharges will quickly turn the water green from massive blooms of microscopic green phytoplankton, while masses of weedy algae will choke the corals, seagrass, and shorelines. A thin surface film of oil emerging from the marina will coat the water surface and interfere with oxygen supply to the lagoon. The green water will heat up more rapidly, causing coral bleaching. At present the algae on the bottom in Codrington Lagoon are mainly “good” algae, the coralline algae that provide the sand for the beaches and sea grass beds. But increase in nutrients will result in the good sand-producing algae being smothered and killed by “bad” soft weedy algae, which produce no sand. Bad algae will be fertilized by nutrients from septic tank outflow or golf course runoff, causing massive harmful algae blooms that will overgrow and kill sensitive nursery ecosystem corals and seagrass. Masses of rotting algae on the bottom will then strip dissolved oxygen out of the water, creating dead zones in which all coral, sea grass, and juvenile lobsters, conch, and fish die.

In summary, Palmetto Point is the most crucial area in the Codrington Lagoon Watershed that affects the health of the Lagoon and Barbuda’s fisheries. The proposed development would deal a mortal blow to Barbuda’s fisheries even more severe than that which the same developer, Discovery Land Company, did in an almost identical golf course, marina, and villa project at Bakers Bay, Great Guana Cay, Abaco, Bahamas, which destroyed the most important mangroves, seagrass, coral reefs, and fisheries of an entire island of fisherfolk (see attached Appendix). 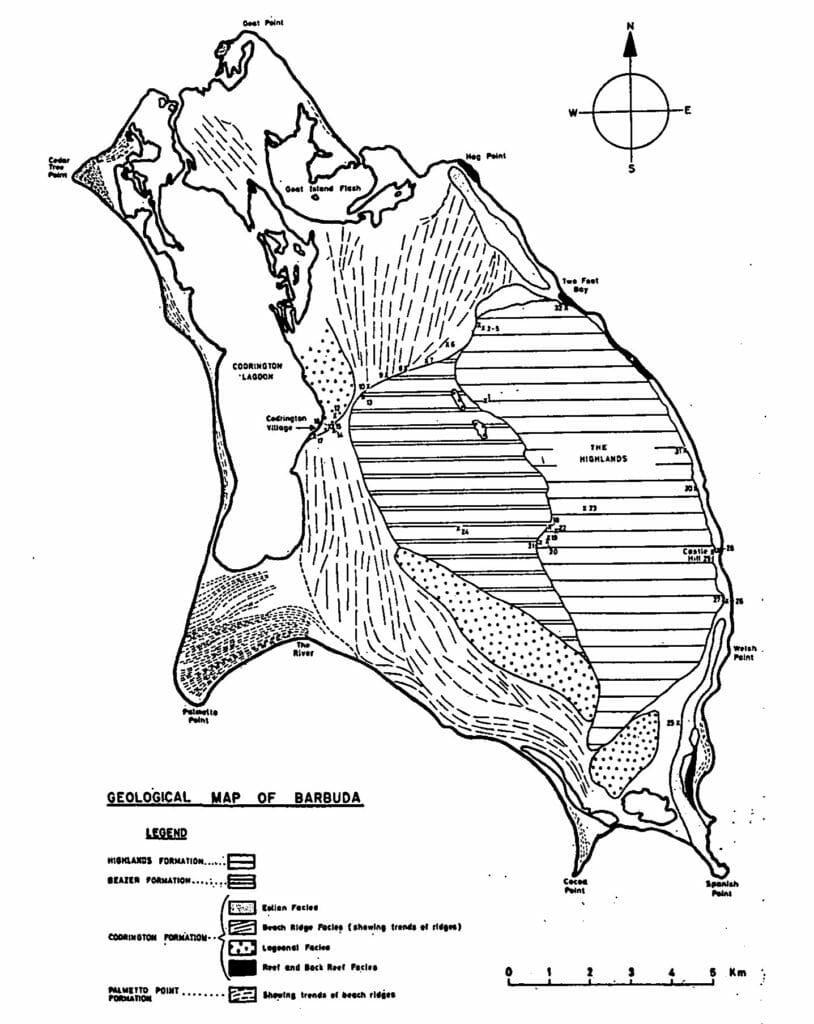 Geological map of Barbuda, from M. D. Brasier and J. D. Mather. Most of the island is made up of old beach ridges. Palmetto Point and the sand dune separating Low Bay from Codrington Bay are the youngest, most dynamic, and rapidly changing geological features on the island, formed by a series of catastrophic hurricanes after sea level reached its present level around eight thousand years ago. Palmetto Point is very dynamic, eroding on the west and accreting on the south during major hurricanes. Because these sand dunes were young and growing, they were the highest land in the Codrington Lagoon Watershed, and the fresh water aquifer under the dunes was the major source of fresh water to the lagoon 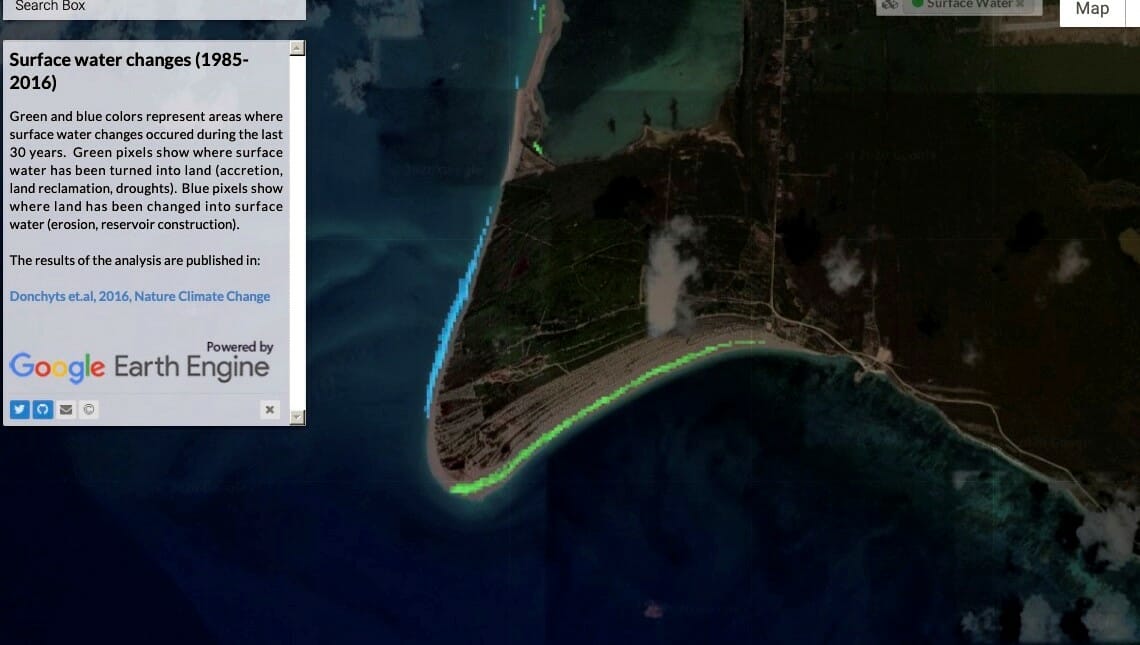 Palmetto Point erosion and deposition 1985 to 2016, superimposed on a March 2020 image. Areas shown in blue were land in 1985, and had washed into the sea by 2016. Areas shown in green were ocean in 1985, but had become a beach by 2016. Notice that the growth of the beach after 2016, caused by Hurricane Irma, was greater in one day than in the preceding 31 years. Images from Aqua-Terra satellite maps, Deltares, Delft University, the Netherlands 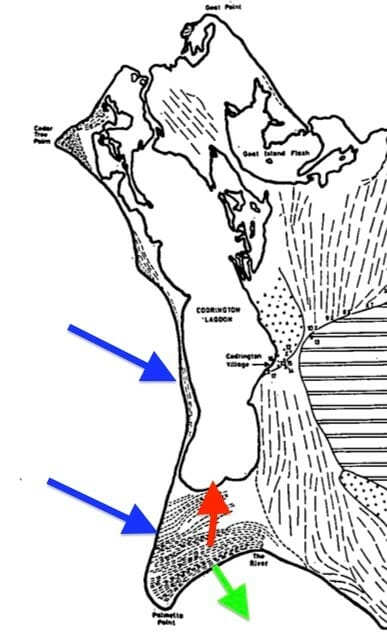 Palmetto Point and Codrington Lagoon showing major general areas of erosion (blue), shore growth (green), and ground water flow to the Lagoon (red). The dashed lines mark old sand dune formations, each made during a different past hurricane event. Those to the left at Palmetto Point and were growing to the southeast. Those on the right side are ancient fossil sand dunes that formed 120,000 to 130,000 years ago, when sea levels were about 6-8 meters higher than today. The sand in these are cemented and do not hold as much water

Dr. Thomas J. F. Goreau collected algae for scientific reseachers as a child in Jamaica, and has dived in most Caribbean countries over nearly 65 years, looking at the ecology of the corals and algae. He led the major study of coral reef health in Antigua and Barbuda in 1996. Some of his relevant publications include:

A. DeGeorges, B. Reilly, & T. Goreau, 2010, Land-sourced pollution with an emphasis on domestic sewage: Lessons from the Caribbean and implications for coastal development on Indian Ocean and Pacific coral reefs, Sustainability, 2: 2919-2949