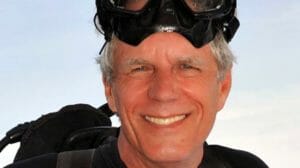 Some of the best short documentaries about coral reef change ever made.

He came to Jamaica do a PhD in coral reef ecology with the founder of the field, Thomas F. Goreau, but he unfortunately arrived soon after Tom suddenly died. Nora Goreau was effectively his major research advisor, but was never officially credited due to the racism and sexism of the times.

Our team was first to explore deep coral reefs from 100 to 300 feet down, and we would dive deep early every morning. Phil’s PhD thesis established the effects of depth and light zonation on coral growth and form over this gradient. Deep reefs are now known in the scientific literature as “mesophotic” reefs, a truly appalling neologism designed to ignore old work and pretend these reefs have only just been discovered.

Throughout the 1950s and the 1960s Tom Goreau was the only person in the world saying coral reefs were threatened and needed protection and management, so in 1970 I continued his campaign to save threatened coral reefs, despite widespread ridicule from other marine scientists, who said all was just fine.

Phil, through his long-term research on coral reef change in Jamaica, Florida, the Bahamas, Indonesia, and many other reefs around the world over the last 50 years, and Tom and Nora Goreau’s other early students at Discovery Bay: Bob Trench, Judy Lang, and Jim Porter, did the most to prove him right.

Here we include Phil Dustan’s essential gems that should be seen by every person who wants to understand more about threats to coral reefs, based on 50 years of personal experience:

Can we save our coral reefs?

At time of writing Phil is in hospital after shoulder surgery just as Hurricane Isaias hit Charleston, South Carolina in the middle of Covid-19 lockdown.

Get well and stay safe Phil!